Starting back in the 1980s, Lewisham People’s Day is a family-friendly, community free festival that brings together all ages, creeds and colours to celebrate the borough’s people and their creativity, vitality and imagination through music, art and culture. After a few years of forced stop caused by the Covid-19 pandemic, the event has returned to Mountsfield Park on July 16th. Among the many attractions, our friends and collaborators Unit 137 were responsible for a stage that showcased the richness of contemporary, bass-oriented sound system music, as well as offering a much needed stage to the upcoming young artists Alchemy Allstars. In this blog, SST researcher Natalie Hyacinth offers a detailed report of a truly amazing day.

“If you black, you white, we don’t come fi fight” – Poser Bless

The above words, sung enthusiastically by Poser Bless, I felt represented the beautiful day of sound system, music and culture hosted by Unit 137 for People’s Day on Saturday 16th July 2022. The lyrics, sung in the afternoon at the Lionz Den showcase, provided a poignant moment of reflection about what sound system culture is: bringing people from all backgrounds together to unite under sound and music.

The day also provided a second opportunity for the Alchemy Allstars to perform their creative work, the first time was the Lewisham Sound System Trail on Sunday 29th May 2022. (A blog about that event can be found here.) The Alchemy Allstars are a group of young local creatives, including singers, rappers, musicians, formed during the Alchemy music workshops that take place every Saturday at the Goldsmiths, University of London Music Department. Alchemy, founded by Mikey Kirkpatrick, who is also a lecturer in music education at Goldsmiths, provides a youth music workshop programme for professional music skills training, mentoring and performance opportunities to local 13-18 year olds. Goldsmiths Alchemy and Sound System Outernational, together with Unit 137 sound system, Sonic Street Technologies and the Lewisham Borough of Culture 2022, have teamed up to deliver this series of sound system masterclasses and workshops. 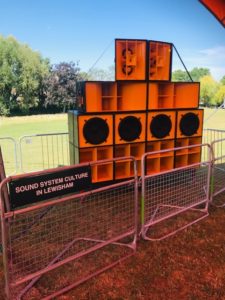 Since April 2022, the students have been partaking in the programme, learning about sound system musical performance and culture, with the first iteration being the Sound System Masterclass with Unit 137 sound system that took place at the Albany on 12th April 2022. (A blog about the day can be found here.) The Allstars have been working on their music over the past few months, improving and fine-tuning their performances since the Sound System Trail, while others were performing for the first time at People’s Day. Hylu, Jerry Lionz and Phoebs from Unit 137 have been mentoring students at the workshops, giving tips and feedback about how to perform live on a sound system. Tips such as keeping eye contact with the audience, introducing themselves to the crowd and always keeping the microphone by their mouths for maximum volume and impact, have proved invaluable to sharpening the Allstars varied performance styles. The hard work, dedication and practice paid off as the Alchemy Allstars performances were brilliant, thoroughly enjoyed by the crowd on a very sunny day in south east London.

The Alchemy Allstars showcase started with POV1SM who performed a charismatic set, engaging the crowd as the opener. His song, with a trap, hip hop based beat was a great way to begin, with POV1SM’s rap flow both seamless and intricate. 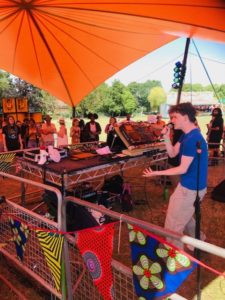 Second to perform was Taiwo with a song called ‘All I Need’. Taiwo is a wonderful singer, with a soulful, authentic voice, almost sounding from another era. Taiwo also plays piano and writes songs with his brother Kenny, who performed later in the showcase. 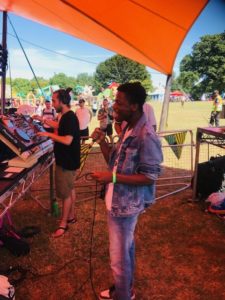 Next to perform was DJ Baconrasher who rapped and sung a song he had been working on for a few months, producing the beat as well as the lyrics. DJ Baconrasher later said he was very happy with the performance and the audience loved it also! 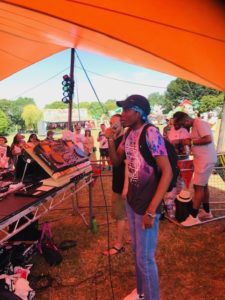 Next was Zoe who sung a jazz inflected song she had written during the Alchemy workshops called ‘Cherry Wine’, with Lina on guitar. It is a beautiful song, reflecting her soft, jazzy vocals and her skilful song writing. It was also wonderful to see Lina accompanying her on guitar and singing along, giving the performance an extra live musical feel. Lina also performed a solo song with her guitar, maintaining well her vocal range and engaging the crowd along the way. 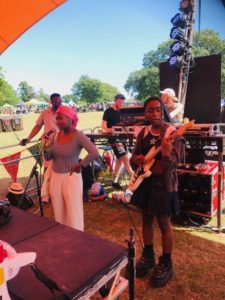 Next was Kenny who sang ‘Never Give Up’, a song he worked on with Jerry Lionz and Hylu with some engineering help from Sleepy Time Ghost. This was Kenny’s second time performing the song, the first time being at the Lewisham Sound System Trail in May 2022. It was lovely to see Kenny’s song come to life again, a song that begun as a simple a capella that Kenny had been writing for a few weeks. Working with Hylu and Jerry Lionz to turn it into a reggae song, Kenny has learned how to master a song, from simple lyrics to production and performance. Next up was Demz who sang a beautiful song that showcased her soulful vocals. Seeing Demz practice and then perform her songs over the last few months has been wonderful. As her voice has become stronger, her confidence to perform has grown also. RB and Lotus followed with brilliant rap performances, with this being Lotus’ first time performing on the sound system. 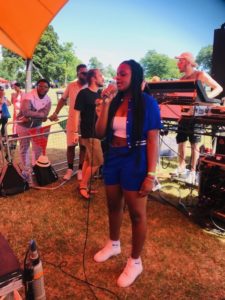 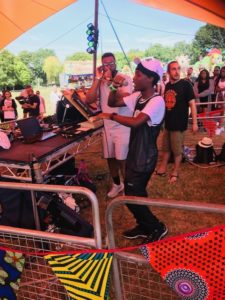 UYT is an artist collective, led by King Vito, made up of a brilliant group of young Lewisham creatives who are passionate about music and music production, performance and lyricism and excelling at their art. The collective has a mixture of singers, rappers, poets and music producers who all work on and support each other’s music. Collectives like these are important as it brings a sense of community to the creative experience and especially music production, which can often be an isolating journey. UYT also showcases female artists such as Shey Vizzy who has been mentored in music production by King Vito, Hylu and Jerry Lionz at the Saturday Alchemy workshops. UYT music can be found on streaming platforms here. Support the youth! 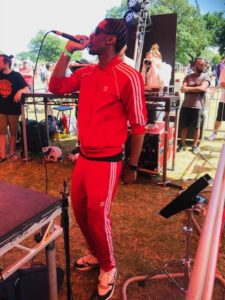 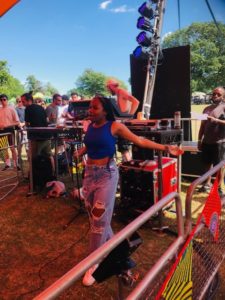 After the Allstars came Síbín featuring Phoebs x Anja Ngozi and Ma.Moyo x Marysia, who provided a powerful performance with inspiring words and resonances of community, strength and love. 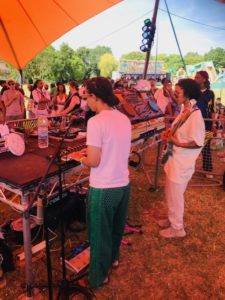 The next showcase was from Lionz Den featuring Jerry Lionz, Sista Lexxy, Poser Bless and Finger Benji. Jerry Lionz, who has been mentoring Alchemy students, performed with a mini Dub mixing desk to play Dub live. As he charismatically said over the microphone to the crowd:

Jerry played The Congos track, Pass Over the Bridge, which he said was special to him as he described the honour of meeting various members of the band. My favourite track of Jerry’s Dub selection was Johnny Clarke’s Declaration of Rights. An inspiring and rousing song that speaks truth to power, injustice and racism. As the track faded, Jerry said to the crowd:

A perfect close to an amazing showcase from the Lionz Den of pure talent, energy, spirit and spiritual upliftment. 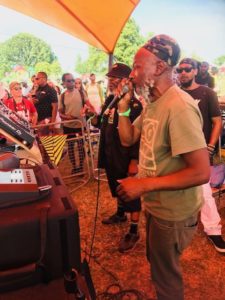 Bun Dem Out Records followed featuring Sleepy Time Ghost, Daddy Freddy, Shumba Youth, Kosher and Yuis on flute. The showcase was a wonderful performance of incredibly talented artists and musicians. One of whom, Kosher told us, was Daddy Freddy who had in 1989 set the original record for World’s Fastest Rapper, with 346 syllables a minute, eventually taking it up to

598 syllables a minute setting a further record. To have such a legend performing incredible, intricate rhymes in front of me was amazing and represented the spirit of talent and musicality of the day. 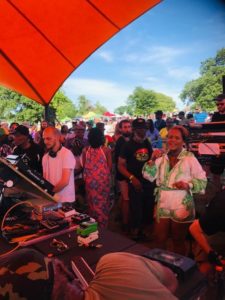 Unit 137 then followed with Hylu’s amazing set of wonderful bass and roots tunes, then DEM1NS featuring Kwake Bass and finally Hylu performing with Deemas J. Kwake Bass was using a Korg Electribe alongside two other performers using Korg Kaossilators to create live electronic music which I thought were interesting types of portable sound machines that could be incorporated into the sound system, with all the machines connected to the sound system wirelessly. It sounded great!” 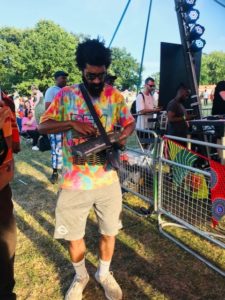 What I loved about the Unit 137 performances was the amazing female representation with Fea starting the day with a great set of bass heavy tunes, roots and Dub. Phoebs x Anja Ngozi, Sista Lexxy and Kosher showcasing their musicianship and unique voices. As well as the talented young female artists performing for the Alchemy Allstars; Zoe, Lina, Demz and Shey Vizzy. They were all brilliant and showed women taking the microphone and commanding sonic technology, something inspiring and progressive to see. 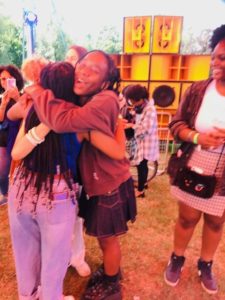 Shey Vizzy and Lina, Alchemy Allstars after their performance

Taking place in Mountsfield Park, Catford, People’s Day is an annual event celebrating the borough’s diverse culture and communities. The event is part of the Lewisham Borough of Culture 2022 and saw many other fantastic artists perform across two stages in the park including Tippa Irie, Novelist and Nina Rose. All home grown artists from the borough, there was a solid sense of local community and friendly vibes at the event, with many activities for children, as well as an important climate conversations area. 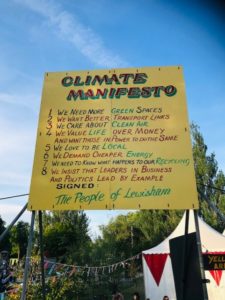 The People of Lewisham Climate Manifesto

People’s Day 2022 was a wonderful day of homegrown culture, music and community. The highlight of the day was the showcase of young local talent who are all creatively making their way and mark on a changing borough. A forthcoming part of the sound system education Alchemy students have been receiving since April 2022, will be Hylu from Unit 137 organising for students to press their original music on a vinyl record. This is an exciting and novel way for many students to produce and hear their music. Watch this space for the Alchemy Allstars record coming to you soon! 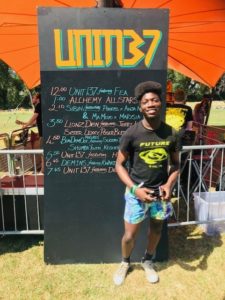