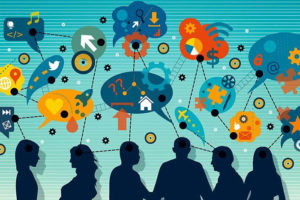 SST hosted a research network meeting on Friday 6th May 2022 called Relationalities of Research. We invited research colleagues that are part of the SST network to share and explore our relationships as practitioners and researchers to our fields of enquiry and participants. We choose this topic, Relationalities of Research, as a common theme across the diverse range of our colleagues’ interests. These research relations are especially important for those working on music and popular cultural scenes of any kind, often already well-established prior to research.

The aim of the online meeting was simply to share and reflect on the relationships we have built through our own research and how these can be sustained for the benefit of ‘building capacities’, (a term that since the meeting we have now re-thought, more below) of both researchers and those contributing to the research process. For meeting discussion, we were particularly interested in the intersecting asymmetries of power and positionality within research.

We were joined by colleagues from all over the world, such as the United States, Canada, Jamaica, France, Australia, Brazil. There were one or two new faces, but mostly these were those with whom the project has been in touch in the course of our work so far. Participants were a mix of researchers, scholars and practitioners from a diverse range of universities and academic institutions. The dynamic of being both a researcher and a practitioner was a key theme explored throughout the meeting. Through such online meetings, we build on our outernational connections, strengthening our ties with the world’s leading scholars on music, technology and sound system culture.

After participant introductions, we went into three breakout rooms, each facilitated by an SST team member. We felt that discussions within smaller groups would be important in focussing on key challenges and barriers that arise within research. For the breakout rooms, we outlined four key questions on which we invited participants to share their thoughts and experiences. They were:

One of the key talking points to come out of our discussions was the acknowledgement of the colonial, capitalist, oppressive history of anthropological research, the kind of research we do as academics and practitioners that we were gathered to discuss. This acknowledgment was considered an important, crucial step in beginning work in the field, in helping to think through power and positionality within research.

Concerns over this history have been long debated by researchers of different disciplinary backgrounds engaged with ethnographic research. Anthropology itself underwent a “crisis in representation” during the 1970s that occurred alongside postcolonial critiques of its connections to colonialism. Dwight Conquergood in his 1991 essay ‘Rethinking Ethnography: Towards a Critical Cultural Politics’ proposed that the “eye of ethnography” is directly linked to the “I of imperialism”, where sight is synonymous with surveillance, authority and suppression. From ‘When the Camera Was a Weapon of Imperialism (And When It Still Is)’- New York Times Article, 2019

Marginalised, minoritized and oppressed communities are thus rightfully suspicious and apprehensive of researchers from institutions entering their field, their communities, their lives. Therefore, these communities, often on the cutting edge of sonic exploration, innovation and technology, are to not only be heard through the research, but understood as authors of their own stories. The idea of authorship here, was raised throughout the discussion as an important issue in the field, deeply related to the methodologies and especially the ethics of doing research with(in) communities. In relation to written outputs such as academic publications, one of the attendees noted: “even if I transferred it onto paper, it’s still their knowledge, not mine”.

In relation to this one of the key takeaways for the SST team was the rethinking of the term ‘building capacities’, a term that we used in our original meeting call invite. One of our colleagues noted the neoliberal tone to this: building capacities, for whom and for what? Mark Fisher’s ‘Capitalist Realism: Is There No Alternative?’ came to mind in which he alludes to the fact that within capitalism, we are caught in a capital driven self-referential web, difficult to escape. One alternative suggested was the idea of amplifying local strengths, but we are still open to ideas. 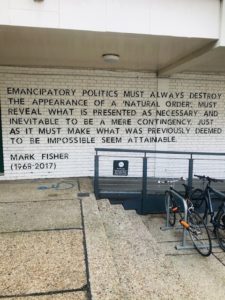 The ecological ethics of sonic technology was also raised in our discussions in relation to the environment, such as, for example, coltan which is the mineral used in all electronics. The role of extraction and environmental racism which impact many marginalized communities, where SSTs are arranged, is a point of interest that we are at the early stages of exploring. Sound systems are often constructed out of Baltic birch plywood which is extracted from the forests of Finland and Russia. This enmeshes sound systems to a global supply chain that implicates longer histories of land conflicts, colonial extractions and local and Indigenous resistance. Sound systems in the Global South also often operate in regions with poor electricity infrastructure, creating the conditions where the power source for their operation needs to be obtained through means beyond legal limits. The tradition of frugal technologies within sound system cultures also speaks to a legacy of environmental racism that marginalized communities have faced and continue to do so. Aadita from the SST team will be further exploring the ecological dynamics of sound system culture in a forthcoming blog.

The network meeting was one of a number of SST meetings to open up our research processes and methods to collaborators and colleagues. This one, following on the heels of SST Research Agents, a Jamaican sound system professional’s reasoning session, and the Goldsmiths Theory and Methods meeting. Since the inception of our project in January 2021, we have been collaborating with a wide network of sites of practice, researchers and performers, which we have discussed in our first year SST report.

To conclude, we would like to thank our network colleagues for attending what was an invigorating and thought-provoking meeting.