As a research assistant to the Sonic Street Technologies team, the idea for researchers’ community meetings was to start to find a gauge for the embodied quality of the research that is emerging in the conversations that we have been having with fellow researchers and others over the course of the year. My initial draw to the Sonic Street Technologies project, in addition to the idea that the culture itself as a rich site for thinking about decolonial, narrative and arts-based research methodologies, was the idea that engaging with embodied practice as research is a potent way to engage with wider audiences beyond academia. At the very least, this researchers’ community meeting provided direct evidence that certainly, personal narratives, the sound itself and other forms of research creations often do far more to engage with both academic and non-academic audiences than strictly theory-based discussions. What would now be interesting is to see how the more theoretically and academically oriented members of the sound system researchers’ community respond to these findings, and how it shapes our own approaches in research dissemination, were we to shift our focus from traditional academic modes of outputs to performance-based research creations.

The Sonic Street Technologies team facilitated the first researchers’ community meeting, with 22 researchers and practitioners from four continents joining us online, on December 16, 2021. As we wrapped up our first year of research in the Sonic Street Technologies team, we wanted to bring together all the research agents who we had been working with through the year together with some we hope to be working with in the near future.

It was a great experience to everyone – and us – to meet online. Working closely with research agents “in the field” of a local SST scene has become central to our project to an extent we never originally envisaged. This is a great pandemic benefit. The project aims to build local research capacities ands to create space for practice-based research grounded in real life communities, SST professionals and researchers across the world. So, it became imperative to bring together the broader community in real time for collective dialogue.

The SST team – myself, Brian and Julian – discussed the current progress of the project with the wider community in order to engage their imaginings and reshape how we think about arts- and community-based ethnographic research.

A key highlight of the event was research agents, namely, Gopal Dutta and Mandeep Samra, sharing their ongoing work with the sound system community in Huddersfield, United Kingdom. The short video clips with local practitioners, Gopal Dutta and Mandeep Samra made a big impact, providing personal insights into how sound system cultures took shape. Their project traces the histories of migration, local sound system technological developments and cultural production that has created a thriving sound system scene in Huddersfield and throughout Yorkshire, originating from communities from the Caribbean settled there. In their work, they have interviewed some key figures in the development of the Huddersfield sound system scene. Some of these people include Artnel Johnson, a former technician at Venn Street Cleopatra’s/Silver Sands night club, the heart of the Huddersfield reggae scene, the likes of Riddim Master and Dee Bo General who are contemporary sound system operators, and Jeff Lewis, the current owner of Matamp, whose founder, Mat Mathias, was an engineer with important technical contributions to the early development reggae sound systems in the area. 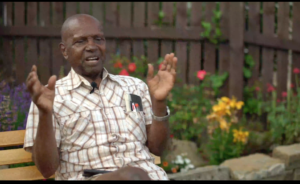 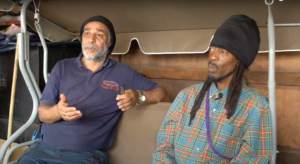 From left to right, Riddim Master and Dee Bo General. Riddim Master has a long history with various Huddersfield sound systems and is now part of “Gates of Zion”, which is a new sound system run together with Dee Bo. Dee Bo has been in a number of different sound systems (“Chappa Tone”, “Youth Man”) but most famously “Armagideon”. (Photo credit: Zoe Opal East) 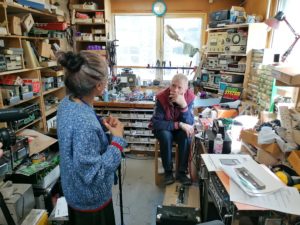 SST’s research agents from Jamaica, led by Dr. Sonjah Stanley Niaah, Dr. Dennis Howard and Ms Ashly Cork from the Reggae Studies Unit of the University of West Indies, Mona, also presented their ongoing research. This is about the various challenges and changes in sound system cultures due to transformations in socio-legal infrastructures over the years in Jamaica. As one of the key points of origin for sound system cultures, the Jamaica case study provided us with some insights into how local communities negotiate the culture as wider sociopolitical forces impact Jamaican society. The Jamaica team has been interviewing some originators of sound systems in Jamaica, including Monte Black, of Merritone Sound System, Vincent ‘Vin King’ Edwards of King Edwards Sound System, and Maurice “Jack Scorpio” Johnson, of Black Scorpio Sound System. 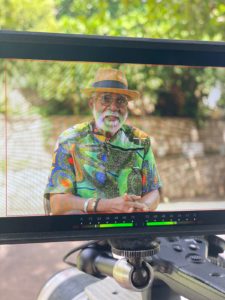 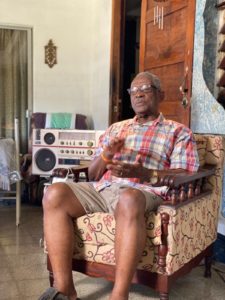 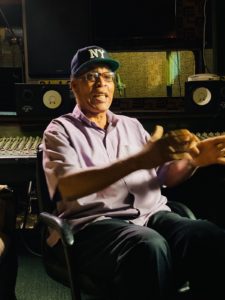 Common to both of these case studies was the focus on the lived experiences of individual agents in the development of the unique sound system cultures. By focusing on individuals who were part of the pioneering wave of the specific cultural milieus, we can consider their present status with a poignant sense of the human dimensions, material ingredients and affective worlds that combine to create contemporary sounds. The discussions surrounding these two ongoing case studies provided a rich context for ensuing discussion throughout this meeting.

Then we divided into three breakout rooms to discuss matters relevant to their roles, or prospective roles in the project.

The breakout room dedicated to the country survey and the survey tool has gathered researchers who are currently working (or are expected to start shortly) on the country surveys for Jamaica, Italy, France, Brazil and the UK. The discussion kicked off by reviewing the main criteria informing the design of the questionnaire. These are: the comparability between different SST and SST scenes around the world; the implications of doing research in a dynamic and everchanging setting: the respect for SST practitioners and the knowledge they embody as a key feature of the whole research project.

These discussions reinforced the ways in which each country and SST scene has its own specific features, and that learning them is part of each researcher’s job. In this context, each researcher will have to develop a unique strategy based on their specific background and existing knowledge, catering them specifically to the country and SST scene they are researching. This first round of surveys includes countries featuring very diverse profiles concerning the local SST scenes, with Jamaica and the UK being particularly challenging and pivotal for the whole project. The ongoing survey process itself is then expected to provide very valuable feedback to the SST team that will be processed and incorporated in the research to come. It would be interesting, furthermore, to reflect on how the survey process can incorporate the nuance, affective ethnographic details that have been captured, for instance, by the ongoing Jamaica and Huddersfield case studies.

In the gathering for case study researchers, there was particular interest in the content and methodologies in the Jamaica and Huddersfield case studies that were already presented. There was an engaging discussion surrounding the use of audio-visual material in the ethnographic process and the ways in which people can establish trust and rapport with the interviewees. Participants suggested working with existing archival material, remote ethnographic methodologies, and the use of social media and blogs to engage with local sound system communities and researchers. These methods, in tandem with contemporary research, can capture a rich array of narratives, moods and trends that carry forward sound system cultures.

Finally, there was a room dedicated to prospective researchers and contributors to the SST project. This was a diverse group of people who were located across Europe, the US, the Caribbean and Africa, who were interested in developing their own case studies or country surveys for the project. Much of the discussion in this group surrounded engaging with scenes and regions that SST has not fully considered yet, the ways in which practitioners and researchers can collaborate as knowledge producers, and multimodal and arts- and performance-based research methods. These methods, too, can provide tangible ways to attend to the embodied dimensions of sound system cultures, especially in ways that are readily accessible to non-academic audiences.

This researchers’ community meeting was the first of what we hope to be of many such gatherings throughout the span of the SST project. In our next iterations, we hope to engage with the more academically and theoretically oriented enthusiasts and participants who are interested in research on sound system cultures, and the socio-cultural, transnational, political and philosophical traditions they embody. We hope that such spaces create a bridge between ongoing research creation and theoretical scaffolding as the overall research for the SST project unfolds. We were very pleased that at the end of the meeting research agents shared contact information to be part of the ongoing group.

If you have an idea for a case study relevant to the SST project, please get in touch by emailing us: info@sonicstreettechnologies.com