This blog is the final iteration a series of soundwalk ethnographies aimed at verifying the resilience of the sonidero culture during Covid-19 restrictions. Young researcher Linette Rivera guides us through the streets of Mexico City again, this time  in the district of Tepito in October 2021, where the people have designed a strategy to defeat police repression and celebrate the barrio’s anniversary.

This piece continues the series of Mexico City sound walk ethnographies (check part 1 and part 2) aimed at verifying the resilience of the sonidero culture during and in the aftermath of the Covid-19 restrictions. In October 2021 I made several visits to the barrio of Tepito, usually during the weekends, and once on a Tuesday, when most of the market shops are closed and therefore the community life flows unhindered. Tepito is indeed a huge commercial district that attracts a global crowd of customers, not only from Mexico but also from other Central and South American countries.

The barrio is located a few blocks from the main square of Mexico City. It’s an area rich in culture, whose history dates back to the pre-colonial days. The word ‘Tepito’ is derived from a Nahuatl term that means ¨little temple, hermitage, or chapel¨. During the pre-hispanic period the goods which did not pass to Tlatelolco, the main market of the great Tenochtitlan, were sold in this area. In 1521 it was called Tequipeuhcan, which means ‘the place where slavery started’. The last Mexica bastion, here it was the house where Cuauhtémoc had to surrender to Hernan Cortes after resisting with the mecapaleros for a long time [1]. For this reason, nowadays it is also known as the barrio bravo (‘the fierce district’).

View of El Paravillo 15, one of the oldest vecindades in Tepito, October 2021 © Linette Rivera

Nowadays Tepito is not only a barrio of trades but also of cultures, crafts and sports, the home to a rich tradition of shoemakers and the birthplace of several great boxers. The above description could be useful to give a general idea about the atmosphere in the barrio. Among the many trades, crafts and shops which make this barrio so lively the sonideros are also an important part of the local cultural landscape which managed to survive to the Covid – 19 restrictions. About ten years ago, Tepito witnessed a boom with las chelerias (street bars) which have now become a good spot for sonideros to play. On the 14th of October 2021, I attended the celebrations for the anniversary of the market. On that occasion  I could talk with people who attend the bailes every year. They remembered with a bit of melancholy how things worked a few years ago, when organizing bailes was easier.

The visit was realized with the help of Luis Zayago Son Tepito, who lives in the barrio. When we got off at metro Lagunilla and went into the streets looking for sonideros, the atmosphere was quite different since the last time I visited the area six years ago. While walking towards Matamoros Street, Luis noticed an acquaintance who was walking with a group of friends just few meters from us, he suggested me to approach her and ask if she knew about any bailes. She invited us to join them, as they were heading to a sonidero playing outside a cheleria. 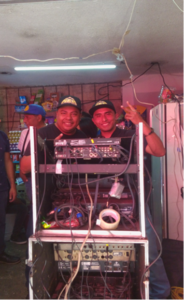 We were able to attend the dance only for a few minutes, when we heard a police siren. The police stopped the party and forced the punters to leave the premises.  Just a few meters away we met Sonido Jr Pancho de Tepito playing for a small crowd at the corner of Callejon the Rivero. This dance was just kicking off , with people starting to dance. 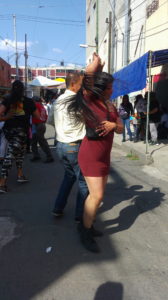 Luis suggested to have a walk around the area to look for more sonideros, who  used to install their equipment in the surrounding streets before the lockdown. He showed me some important sonidero spots in Tepito, such as the Casa Blanca, a block of buildings home to one of the oldest and biggest vecindades in Tepito, where anthropologist Oscar Lewis’ 1961 book The Children of Sanchez is set. In his book, Oscar Lewis mentions a neighbour of the Casa Blanca vecindad who, in 1955, wishes to become a sonidero: ¨He had dreamt to rent a turntable and vinyl to organize bailes at the weekends, as some people did in some of the biggest vecindades¨. Interestingly, Lewis’ study of a poor Tepito family made an enduring impression on reggae trombonist Rico Rodriguez, who used the title for his well-known 1979 tune. Casa Blanca is also pictured in Joyce Garcia’s documentary  Yo No Soy Guapo, as she visits the family of one of the first female sonidero in Mexico City, the late Guadalupe Reyes Salazar aka Sonido La Socia, who was a Tepito resident. 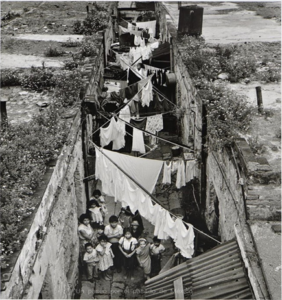 Casa Blanca in the 1950s. Image from web

Why that name? Because back then the Pintores street was the arterial road where cars were painted and always there were a lot of activity going on. So, we adopted a song from la Matancera called ‘La Esquina del Movimiento (…) However, the parties came to an end because of the police who aimed to erase the causes of the rows and delinquency. Not only the people from the barrio formed the rumba. They come from la Guerrero, La Peralvillo, La Merced and other central barrios, where bailes were organized too. And we played in different places, as well as in Tepito. 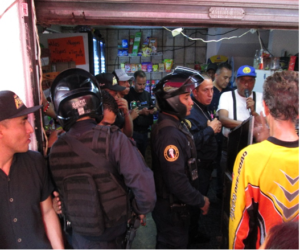 When I went back to la cheleria with Luis, also the little police convoy had returned, and this time the party was finally stopped. While the crowd dispersed, the sonidero packed up his equipment. A shopping cart was filled with drinks, to be easily carried to Pinteros, the new spot where the party would continue. An attempt to start a new party in Callejon de Rivero drew the attention of another police patrol. They went straight to the sonidero to ask them to stop the music. While some punters left afraid of possible troubles, most of them stayed. Some people protested and booed at the police, shouting ‘we only want to dance!’, and ‘we only want to get have fun!’ The whistling and boos went louder, until the police left the premises, and the baile could finally start, quickly gathering a peaceful crowd of workers, shopkeepers and people from other barrios. 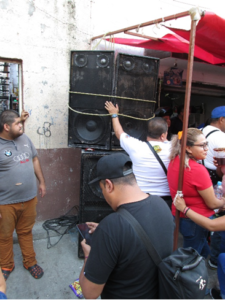 Stringing down the sound after police intervention, October 2021 © Linette Rivera

About three hours later the police returned again to stop the music. One of the organisers took the mic to announce that the baile was being moved to Casa Blanca. The sonidero unplug the equipment while the police waited for all attendees to leave the alley.

The word spread quickly among the crowd, that the party in fact was not at Casa Blanca, but at Pintores, and a good half of the crowd headed there. When we arrived at Pintores, the sonidero was playing and the bar was selling drinks, people were happy dancing. It was a great, friendly atmosphere, with entire families and regular punters attending the baile, as well as people from the barrio. Two more sonideros played there for about three hours until the police knocked at the door asking to stop the dance because of Covid 19 restrictions. The word spread fast again that the sonideros would continue at the Peñon de los Baños, so part of the crowd moved again.

The sonidero strategy of of packing up the equipment to continue the baile in a new spot (sometimes just a just few meters away) is something I hadn’t witnessed before. That was not to the case for most of the crowd, who seemed used to that and showed a great degree of organisation in passing the news and moving from spot to another in order to peacefully defeat the police intervention. Moreover, it was great to see the audience making an active contribution to allow the continuation of the party by standing their ground and rising their voice to reclaim that place and time to respectfully celebrate the barrio bravo’s anniversary. 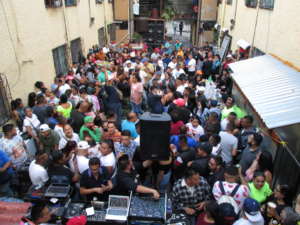 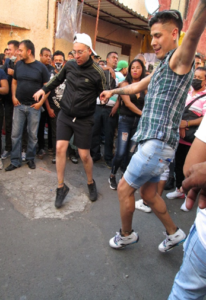 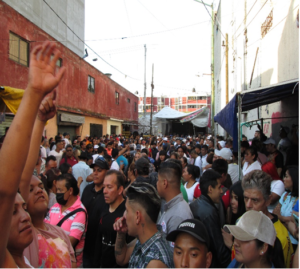 [1] Indigenous workers using a tumpline, or mecapal, from the Náhuatl word mecapalli.