An Afternoon at the Tibiri. A Soundwalk in Mexico City


SST is pleased to welcome a new guest blogger from Mexico City. Young researcher Linette Rivera takes us through a sound walk across two cradles of the sonidero culture in Mexico City, Mercado Jamaica and Mercado Sonora, to check out whether the sonideros were playing out despite Covid19-related restrictions.

Street map of the journey.

The sonideros parties in Mexico are part of a grassroots culture that is rooted in the barrios and indigenous neighborhoods of Mexico City. Whether it is unclear when the sonideros tradition begun, it is mentioned that already in 1945 some people used to bring their vinyls, speakers, and turntables, to social gatherings [1] . A usual feature of any celebration, the sonideros animate different kind of festivities, from weddings to saint’s days, by occupying the streets and making the urban landscape into a temporary dancehall. In Mexico City there are a few barrios which are considered as cradles of sonideros, due to their social and cultural legacy, such as La Merced, Peralvillo, Azcapotzalco, La Guerrero, Iztapalapa and Peñón de los Baños, among others. Vecindades were important spots where Sonideros used to host parties [2]. While most of the traditional vecindades in the metropolis have disappeared, a few had survived renovation and continue to preserve the sonidero practice.

Tibiri [3] is the name that was used to name the sonidero parties in the seventies in Mexico City. The following text is an attempt to describe the sonideros environment that still persist nowadays in a few of the city barrios. These barrios have a fascinating cultural heritage; inhabited since the pre-hispanic period, nowadays they survive gentrification. A brief research trip was realized between the 23rd and 24th of September 2021 to the Jamaica and Sonora markets in Mexico City. The visit aimed to verify if the sonideros were having dances despite the restrictions dictated by local authorities due to the Covid-19 pandemic. 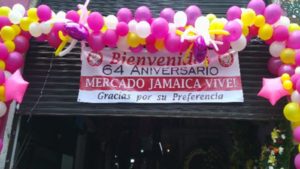 On the 23rd of September I visited the Jamaica market, one of the most known markets in the city. Besides an extensive variety of products, Jamaica hosts is a special shed dedicated to flowers, so it is also known as the flowers´ market. An arch made of balloons decorated one of the entrances. Temperature was measured and sanitizer was provided at the gate before access. A group of mariachis were visiting the different shrines inside to offer a serenata to la Virgen de Guadalupe. In the market, I did not notice any kind of celebration. By asking a shopkeeper I learned that local authorities prohibited the dances, so the market did not organize any activity to prevent a forced closure. She also reminded me that the Sonora Market was set for reopening after lockdown on that same day. I decided to head there. I left the market and walked to Congreso de la Union Avenue to catch a bus towards metro Fray Servando. 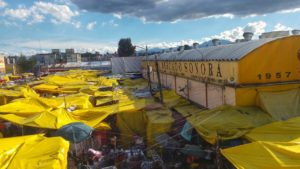 Stalls at the Sonora market.

I arrived at Fray Servando Avenue and walked towards the market. The Sonora market is one of the most visited markets in Mexico City. While I was walking, the shops and street stalls were busy as usual. When I arrived at the corner of Callejon de San Nicolas, I turned to the left towards the auditorium of Sonora market looking for the traditional concheros dances [4] that usually take place inside, and on the street in front of it. As I continued walking through herbs and Santeria stalls I could not see anything. Apparently no celebration was taking place. 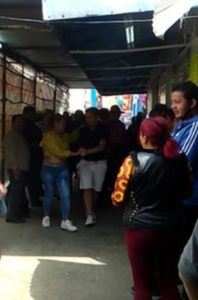 Reaching Canal de la Viga street I could hear music from a distance. There wasn’t any visual sign to announce the dancehall. I continued to follow the sound. In the middle of the street, I noticed three speakers at the entrance of a vecindad and a crowd of people dancing. The banquetazo [5] had a good atmosphere and people were enjoying the dance. Initially I thought the music could be an mp3, maybe played by a shopkeeper. I asked to a man next to me if there was any sonidero playing. 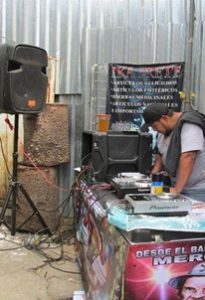 The attendant confirmed that a sonidero was playing, and he pointed at the end of the hall. Being a stranger to the place, I was unsure about accessing it. I decided to greet the people who were attending a provisional bar installed in the hall by saying con permiso! to continue on my way. At the end of the hall there were two men playing on the table using a mixer, two CD players, a monitor, and amplifiers. I asked if I could take some pictures and they accepted. One of the patrons looked familiar: to my surprise he was Luis, a former classmate that I have not seen for years. We started talking and he asked me if I would like to know his cousin Ramón, a local resident who has been in the sonidero culture since his teenage days. Luis told me that he still preserved some old equipment. I accepted, so Luis took me inside the vecindad. 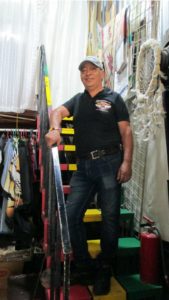 Mr Ramon Hernandez at his place.

At the back of the hall of the vecindad we met Ramón Hernandez. He welcomed my visit, invited me in and showed me part of his equipment that he preserved with great affection. Ramón explained that thanks to his knowledge about technic drawing he has been able to self-build some of his equipment. He also painted his logo on the surface of the horns and created a banner by using an old piece of wood. Sonido Pirata is the name that was given to him by his neighbours. “I love pirates stories, so the barrio called my sound Sonido Pirata”. 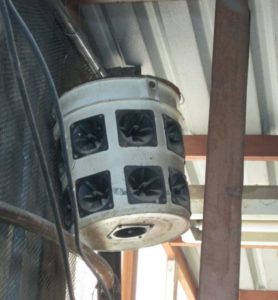 Tweeter box made with a plastic pot.

A tweeter box made out of a plastic pot was hanging from the roof. Ramon remembers that he had to build some of his equipment because he did not have enough money to buy equipment when he started, at a very young age. To create the speaker boxes he recycled the wood from old wardrobes dumped on the street. According to Ramon, “el Sonidero nace no se hace” (to be a sonidero you have to be born a sonidero) . His passion for playing music started when he was just a child. Whenever a party was hosted in his vecindad, he used to leave his house and go to the patio where the sonidero was playing. He remembers how sonideros used huacales (fruit crates) to accommodate speakers, and how they were usually hanged on the wall. However, his father used to take him back home as he thought the sonidero was not an appropriate environment for a child. Fascinated by the music and the equipment he observed, he decided to have a sonido and play at the parties. His grandparents had lived in this barrio for a long time, since the land was a crop field. Ramon is well known in the barrio of Sonora as a longstanding resident. After having listened to his story, I went back to the party. At this point I felt invited to the session, so I could capture some images throughout that afternoon. 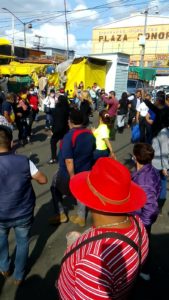 Pachuco style in the dancehall.

Sonido Pirata plays and organizes the dance every year, 2021 being no exception even if the local authorities prohibited the dances or any kind of festivity in the city. I learned that, while the speakers were placed at the entrance of the vecindad, the CD players were inside the yard to prevent the police to confiscate them. Sonido Son Tepito, Sonido Que Pango were also playing at the dance. Later on, they decided to hang up a horn on a pole on the street to boost the music and more people joined the dance. It was a relaxed family atmosphere; attendants were enjoying the dance, and apparently most of them knew each other. After twenty minutes a patrol appeared on the dancefloor and ordered to remove the speakers. The dance went on without any major problem.

[2] A vecindad is a working class housing model where residents share open air areas like patio, restrooms, and laundries.

[4] Traditional dance and ceremony showing syncretism of pre-Hispanic and Christian traditions, which has been performed since the colonial period.

[5] Banquetazo (from banqueta, ‘pavement’), describes the action of occupying a public space, the pavement, to dance or drink.