Sounds in the City: Street Technology and Public Space


We are glad to announce the publication of the Sound System Outernational (SSO) guest-edited special issue of the Journal of World Popular Music – Volume 8, Number 1, available here. Edited by SSO team members Brian D’Aquino and Oana Pârvan, the special issue features some of the contributions originally presented during the international symposium ‘SSO#5: Sounds in the City’, held in Naples (Italy) in April 2019. Contributions are in a variety of formats, including academic essays, poetry and music podcasts, to reflect the richness and the diversity of the event. Authors include (in order of appearance): Brian D’Aquino and Oana Pârvan; Louis Chude-Sokei; Sonjah Stanley Niaah; Christxpher Oliver; Tikur Sound System; Moses Iten; Roberto Sciarelli, Sergio Sciambra, Giulia Follo and Salvatore Cosentino; U.N.I.T.Y. Sound System; Monique Charles; Trishauna Stewart; and Feminine Hi Fi. Equinox Publishing has kindly granted us permission to publish an excerpt from the editorial piece (pp. 5-15), which is especially in tune with SST purpose and methodology.

Sounds in the City: Street Technology and Public Space (excerpt)

by Brian D’Aquino and Oana Pârvan

More than six decades have passed since an anonymous person decided to place a loudspeaker outside of a liquor shop in Kingston, Jamaica, in the hope of attracting more customers. Little did the mysterious figure know that such a simple action would influence the popular music of the twentieth century so deeply. The echo of the sound emitted by that extemporary loudspeaker has resonated throughout the planet and across time, right into the new millennium. And nowadays it can be heard louder than ever.

Enveloping the planet in a web of collectively engineered sound vibrations, contemporary sound system culture provides a site for music production, cross-cultural exchange, technological innovation and intergenerational encounter. While amalgamating analogue, digital and popular street culture in a peculiar formation, it connects the local urban and social spaces to a global network of sounds, techniques and crafts. Despite the growing cultural attention in the last decade, sound system culture remains a mainly underground phenomenon, thus articulating what should be named an alternative knowledge system: a specific cultural formation through which people experience, value and interact with music, race, sound, technology, freedom of expression and their circulation in a globalized world. 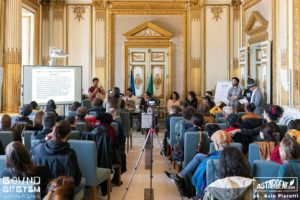 Today,  the  technologies  for  unity  and  transformative  creativity  that  sound system culture has been fine-tuning for the past sixty years should be regarded as an infinite archive and arsenal of tools for resisting debilitating isolation and exploitation, both consequences of the many forms of management of the pandemic that have systematically “extend[ed] to the whole of the population the political measures of immunization that had until then been violently applied onto those who were considered to be aliens both within and at the borders of national territory” (1).

Therefore, this special issue “Sounds in the City: Street Technology and Public Space” is not only based on the community-building work of the Sound System Outernational (SSO) research and practice network (established in 2014), neither will it only reflect some of the many contributions hosted by the fifth SSO event held in Naples, Italy between 4–6 April 2019. This special issue will amplify the knowledge and intervention of sound practitioners and researchers in order to address questions that have naturally arisen out of the global lockdown imposed by the epidemic: How are we to imagine the street after 2020? What public spaces is there still room for? And, more importantly, how can sound provide a foundation on which to build unity and agency when faced with pressure from states and corporate actors?

In this sense, this special issue aims to acknowledge and widen the steadily increasing research interest for the Jamaican-born cultural institution of the sound system and its endless resonance in contemporary popular music cultures by bridging the work of a growing community of scholars and researchers. Moreover, it also aims to consolidate and further enhance a specifically tuned “practice-as-research” methodology which, we believe, may provide ground for reflection in the wider field of popular music studies.

Central to the approach established by Sound System Outernational is the valorization of the practitioners’ experience and their active role in the development of the culture. In recognizing the epistemological value of the practice of selectors, MCs and box-builders, the aim is to challenge a vertical, language-driven concept of notions such as culture and knowledge through the horizontal, inclusive, shared, multisensorial experience of the sound system session. Here the embodied knowledge of soundman and soundwomen stands not as the mere object of inquiry, but as an alternative research methodology.  The practitioner becomes investigator, scholar, researcher in the broader sense, and the practitioner’s activity becomes the necessary complement and balance to the academic work. 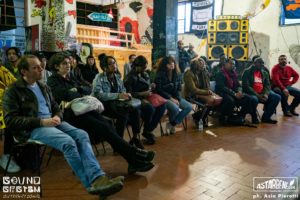 Our activity is intertwined with fields of study such as ethnomusicology, reggae studies, science and technology studies and philosophy, but also draws on the impressive history of organization and sound practice as a social, economic, artistic and political enterprise. Finally, with the event in Naples, our network has activated a crucial connection with the infrastructure of activist outlets out of which the sound system movement was born in Italy in the 1990s. Alongside reading the works of Carolyn Cooper, Louis Chude-Sokei, Sonjah Stanley Niaah, Julian Henriques and Kodwo Eshun, we listen to the full extent of the complex social parallel universes brought to life by sound practices that go from roots to dub and reggae, to grime and afrobeat. Understanding how these sound practices ground forms of resistance, organization and education is what informs our epistemological stance in terms of conceptions of time, knowledge production, space, history and body that are able to transcend and parasite the Western metaphysical dogma of modernity.

According to this approach, the issue features a multi-faceted composition concerning the style of contributions, including essays from leading and upcoming scholars, as well as dialogues, interviews and hyperlinks to audio and video materials, in order to allow and give value to the participation of all practitioners beyond the limits of mere academic writing. As with the Sound System Outernational #5 (SSO#5) event – “Sounds in the City: Street Technology and Public Space”, the overarching intention is to acknowledge the way academic research can interact with local and global grassroots music movements in a transformative way, establishing connections, nurturing skills, promoting mutual recognition—in other words: amplifying the street culture of sound systems bottom-up until the output peaks into red.

Depending on one’s location, listening to an echo is qualitatively different. The metaphor of the echo will provide one navigation tool to engage with this special issue.

‘Sounds in the City: Street Technology and Public Space’ was born out of a particular set of echoes. The first echo was informed by our design of the event in Naples. The intention was that of amplifying the value of a local scene—Naples’ sound system scene—by placing it in connection with world-wide technologies and practices for which the city’s university and community centres provided an infrastructure for exchange and encounter.

The second echo, the event itself—meant to extend the already existing network of researchers, sound practitioners and activists—went way beyond our expectations.  Perfecting an already established format, that would intertwine academic, sound practice and performance communities in the hope of stimulating synergies and collaborations, SSO#5 brought together 38 speakers from more than ten different countries, alongside 12 artists who performed during three music sessions, some of which shared their skills in two workshops. We also hosted two important premieres: the first time that veteran soundmen and soundwomen who made the Italian sound system history lectured in a university, and a commissioned photo exhibition on the country’s sound system culture. Talks reached as many as 200 participants, with people crowding the floors, while the music nights held in the city’s squats reached as many as 800 participants, as with the closing dancehall session held on Saturday night, showing the non-Italian guests the levels of self-organization that are made possible by the Naples social movement, the same to have fostered the birth of the local sound system scene.

As the map indicates (see below), the outernational dimension of this event—involving sound systems, research institutions, educators, activist organizations and artists from four continents—was made possible through a deep focus on locality, in terms of skills, professionalities, locations, communities and grassroot politics.

Map of the participants to Sound System Outernational #5 in Naples, Italy.

We heavily relied on local professionals and groups to brand our event, film it, curate its exhibitions and conceive of its performance nights. The proximity generated by this gathering would not have been possible with-out the collaboration of local researchers, bar managers, photographers, film makers, activists, sound crews and journalists. We believe that any Sound System Outernational event is meant to intensify the value of an already existing scene, while strengthening connections and collaborations that can stimulate new ways of thinking, doing and feeling. This intention is expressed in the way we share resources and focus our organizational budget and attention on local professionals, venues and needs.

The third echo that this collection is the result of is the now. Almost a year later, as we write this introduction, epidemic global lockdown is still unfolding and we are weaving together a series of academic, poetic and musical traces of the entanglements that occurred in Naples.

What these interventions say to us now resonates in different ways. In fact, a year into the new epidemic organization of many of the societies we inhabit, our attention peaks around discussions about lockdown, noise reduction, imminent or past rebellions, technologies of recovery and global citizenship. As music often does, the thoughts contained in “Sounds in the City”, first shared at the SSO #5 event in Naples 2019, were often punctuated by premonitory insights with regards to forms of survival that many interrogate themselves about after 2020.

The works collected in this special issue are innovative for the different ways in which they capture the complexity of the process of “thinking through sound”. Research pieces are accompanied by poetic interventions, interviews and dub essays from sound systems worldwide, in what we attempted to animate as a space of outernational communities united in sound. We suggested the format of the dub essay as a sonic option for encountering some of the participants to the event. Thus, three young emerging sound systems—Tikur from Frosinone (Italy), U.N.I.T.Y. from Tunis (Tunisia) and Feminine Hi Fi from São Paulo (Brazil)—will punctuate this collection with stories, sounds and voices addressing their experimentation with technology and politics. 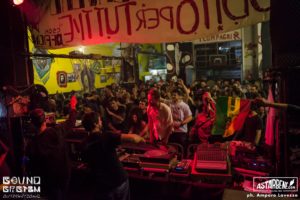 […] The interventions collected in this special issue clearly demonstrate the productivity of a research and practice approach inspired by sound system culture. Moreover, in the post-2020 context, these voices, sounds and grass-root organizations provide essential inspiration towards new forms of life able to nurture the collective dimensions we (still) inhabit. It is by listening to the expansive potential of ruins—not only those of the Black Ark, but also those of our pre-2020 ways of living—that music is able to become the vehicle of premonitions and future genres, social formations and emancipations. Can the recursive reincarnations of “sonic Africas” empower belonging and unity across a global sonic citizenship in an age marked by renewed division, dispossession and isolation? The answer might be a sontological one. One that is able to activate a process of recovery: of history, of the self and of the body.