Sonidos are the SST native of Mexico and a pillar of the local popular culture. The operators, known as sonideros, traditionally hold dances in street markets, car parkingareas, vecindades and other type of informal and formal settings, sometimes in occasion of religious festivities. We are glad to feature on our blog the work of photographer and researcher Mirjam Wirz, who has been documenting this scene for over ten years. This photo essay focuses on the technological aspects of sound systems in Central Mexico (Mexico City, León/Guanajuanto, Puebla), here pictured before, during or after the dances.

This blog is available in Spanish at this link.

Text and Images © Mirjam Wirz / Click on the images to see them full size.

In 2010 I started to research cumbia music and sound systems in Mexico. Over the course of ten years of research I got to know many sonideros (sound system operators), visited dances, made friends, learned about the sound system scene and everyday life in the popular neighbourhoods.

From the beginning I always took pictures of the sound systems when everything was built up and ready but before the dance started, depicting “the architecture of Mexican cumbia sound systems and their versatile configurations, as social monuments” (Wirz 2019). Here is a selection of my images of sound systems at specific dances that have been important to me – either visually, musically or personally. 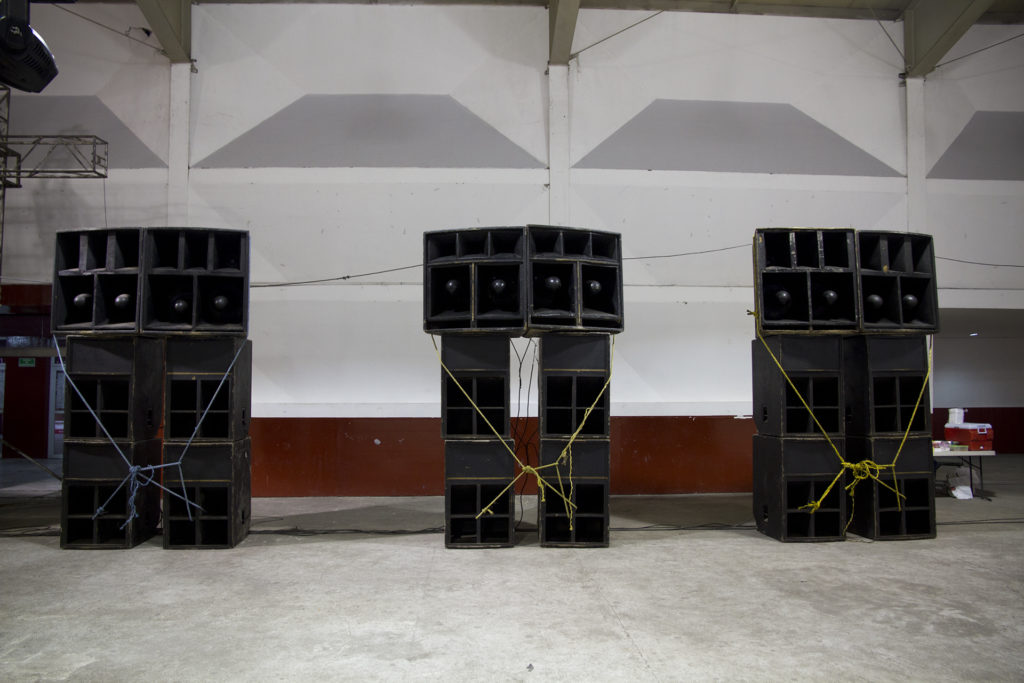 A massive dance in a convention hall at the northern outskirts of Mexico City. That night Sonido Siboney, La Changa, La Conga, Sonorámico, Sonido Pancho, Jorge Frausto, Inmensidad, Mr. Zuarth were playing. Along the walls the sound systems were lined up, massive walls of sound and illumination. Smoke machines filled the space with fog, and dancers drifted in and out of it in a dreamlike manner. 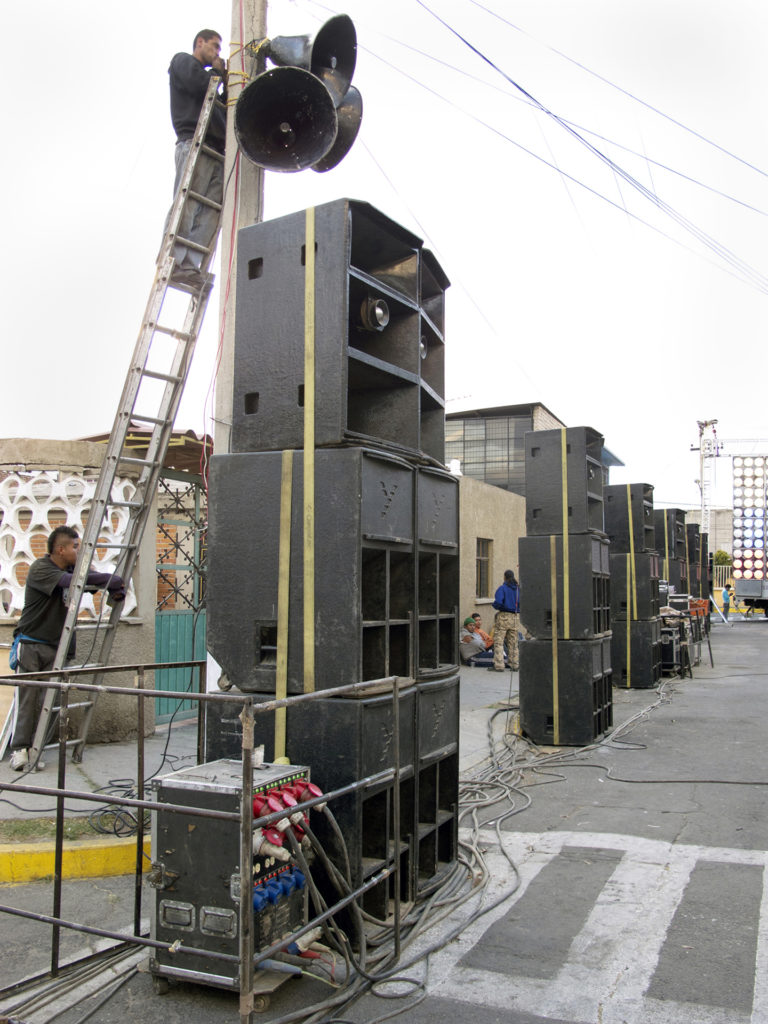 Setting up for a street dance in Aragón (Mexico City, 2011)

Sonido La Conga is one of the biggest sound systems, originating in the Peñón de los Baños neighbourhood in Mexico City, from where allegedly cumbia in its beginnings had started to spread to other neighbourhoods and cites in the country. Pedro Perea’s father was the owner of Sonido Arco Iris, one of the first sound systems in Mexico City, while his uncle is Manuel Perea of Sonido Fascinación – the Perea family is a dinasty of sound operators. Pedro Perea himself looks back on a long career as well, touring Mexico and the United States up to today. His son, Sonido Eckos, follows the family tradition. 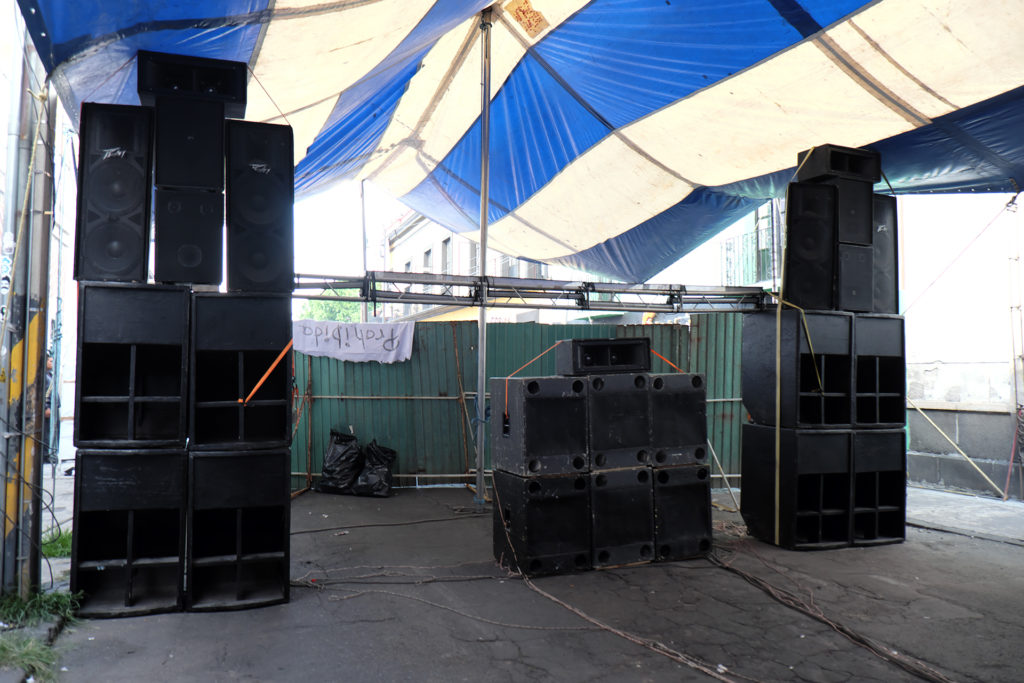 A street dance with Sonido Samurai and Sonido Controversia for the annual fair in the Del Carmen neighbourhood (Puebla, 2016)

It was during the research for my fourth book, “Ojos Suaves/Soft Eyes”, when we went to Puebla to interview Sonido Samurai, Sonido Fantasma and Sonido Master. The dances of Sonido Samurai were amazing, his fan base were groups of very enthusiastic dancers, following him to where he was playing. Sadly, Miguel Martínez, the operator of Sonido Samurai, died at a quite young age at the very beginning of the Covid19 pandemic. May he rest in peace siempre. 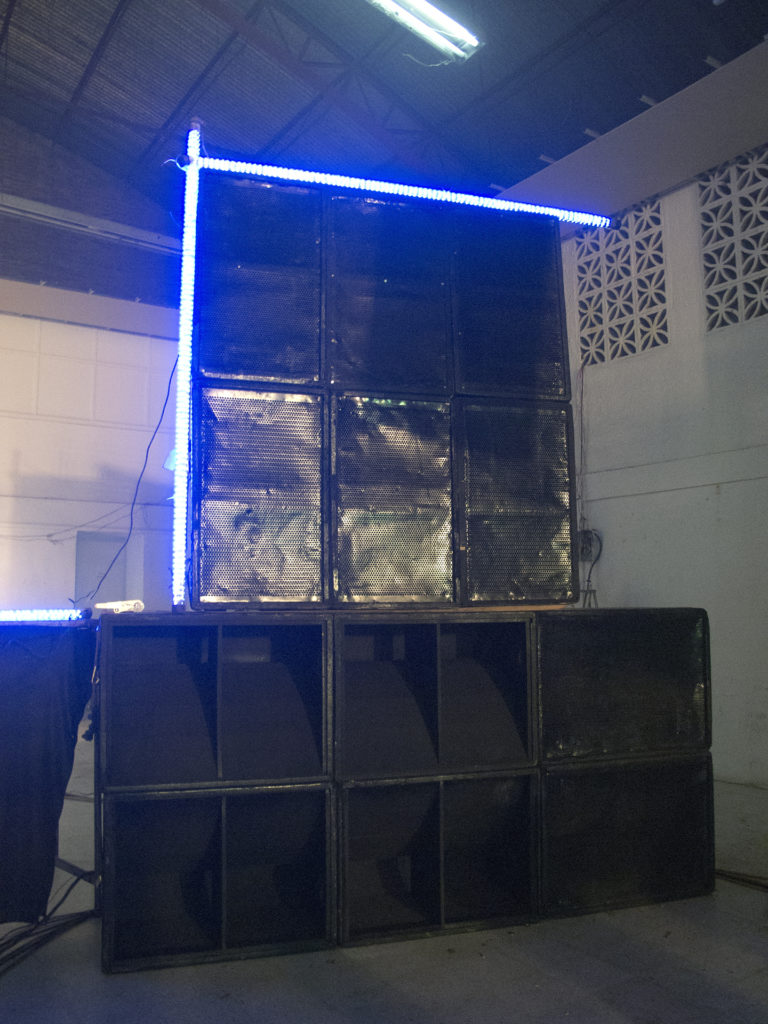 Event in a dance hall in Ixtapaluca (Mexico City, 2010)

Behind Sonido Sonorámico are the brothers Raúl and Manuel López. Raúl is the sonidero – the operator and MC, Manuel the one digging for music for the sound system. For many years Manuel was travelling up and down the continent from Colombia to New York in search of música tropical. The variety and quality of the music of Sonorámico is impressive and was a great source for me for acquiring knowledge about the music. They have a music store, Discos Sonorámico, in downtown Mexico City. 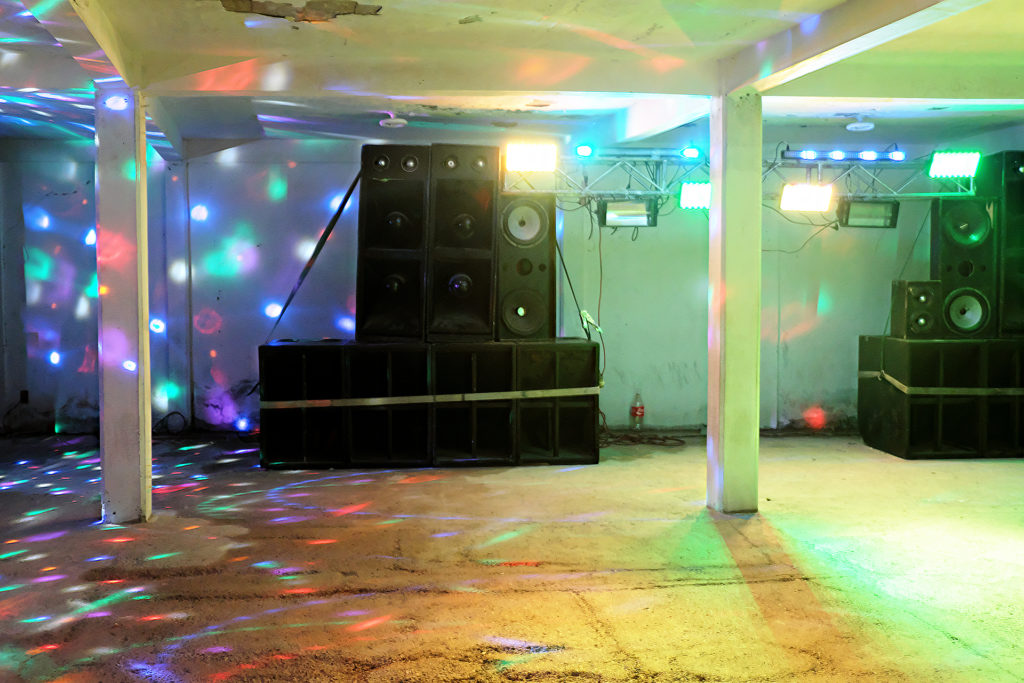 When visiting León/Guanajuato on the research trip for the book “Ojos Suaves/Soft Eyes”, we were told about a dance in a small neighbourhood hall. I like small dances, the massive events are impressive, but the smaller ones often have a better (and definetely) more intimate atmosphere. Even though my companion, Morelos, is a very street-smart person, we got into an unexpectedly rough neighbourhood, meaning it was not difficult to reach Salón Roma, but quite difficult to get out of the neighbourhood after the dance. 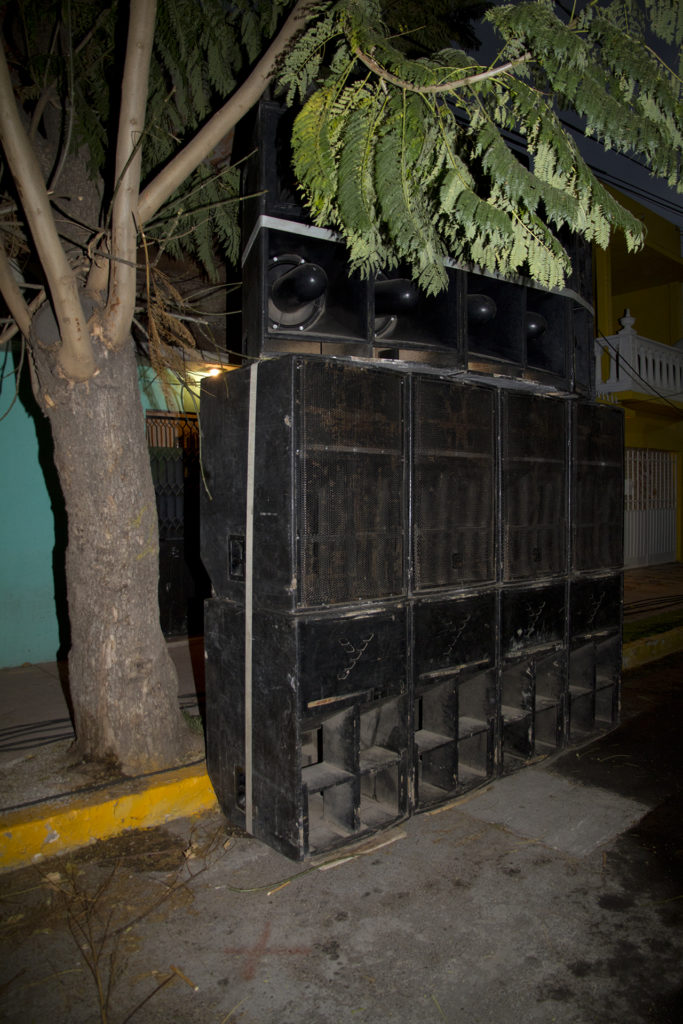 A typical street dance in Mexico City. One street block is closed and the sound systems are built up the day before the dance. On the event day, plenty of young technicians are working for one big sound system, carrying the speakers, connecting the cables, installing the ‘Italian lights’ (as they call them). Then for a moment all is quiet and empty, the sound system is set up and ready, the local kids who came to assist are gone. A bit later, when the daylight is gone, the people from the neighbourhood begin to show up nicely dressed, the sonidero arrives, and the dance starts. This street will be the center of the world for one night. 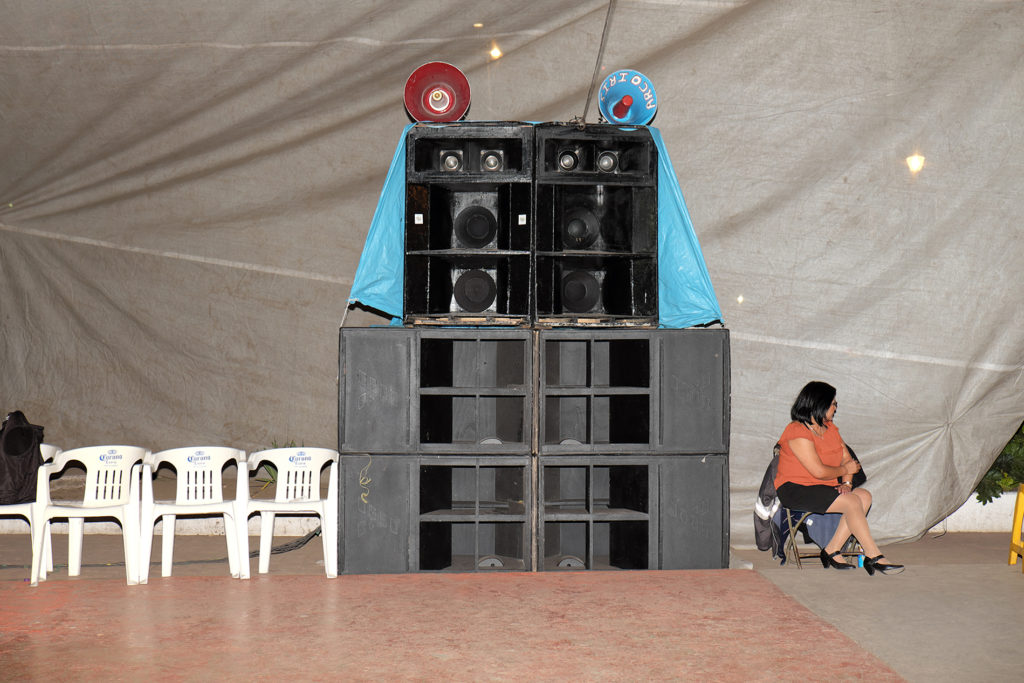 Sonido Continental 2000, the sound system of Miguel Cruz and his family, was the first sound system I got to know when I started my research. Our common friend Morelos brought me to the house of the Cruz family and since then we remained in contact. Sonido Continental is one of the early sound systems in the Peñón de los Baños, also called Colombia Chiquita. This picture is from 2015, when Sonido Continental 2000 had a regular dance event on sunday afternoon in a park in the neigbourhood. People of all ages showed up, all connected by their love for cumbia music. Today Miguel Cruz and his sons host an internet radio show every Friday with alternating sound system guests. 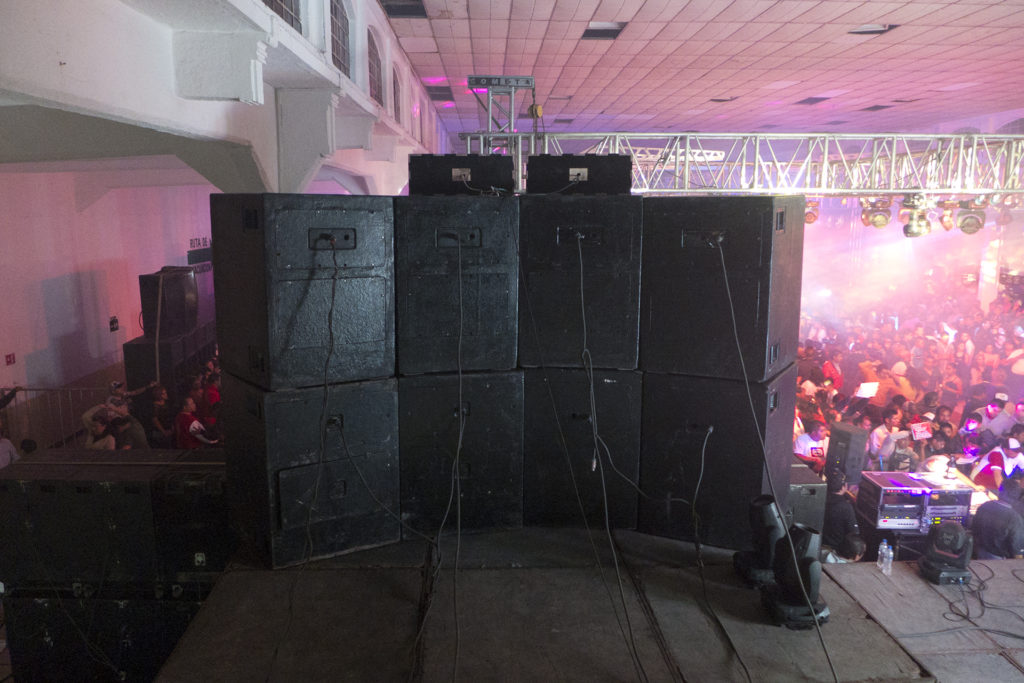 A massive dance at the Ex-balneario Olímpico in Pantitlán (Mexico City, 2013)

For a while, plenty massive sound system dances took place at this venue – a former olympic pool in the East of Mexico City. Over the entrance there is still a mural with the olympic rings, while the stairways at the bottom of the hall are decorated with images of women swimming with beachballs – upstairs. 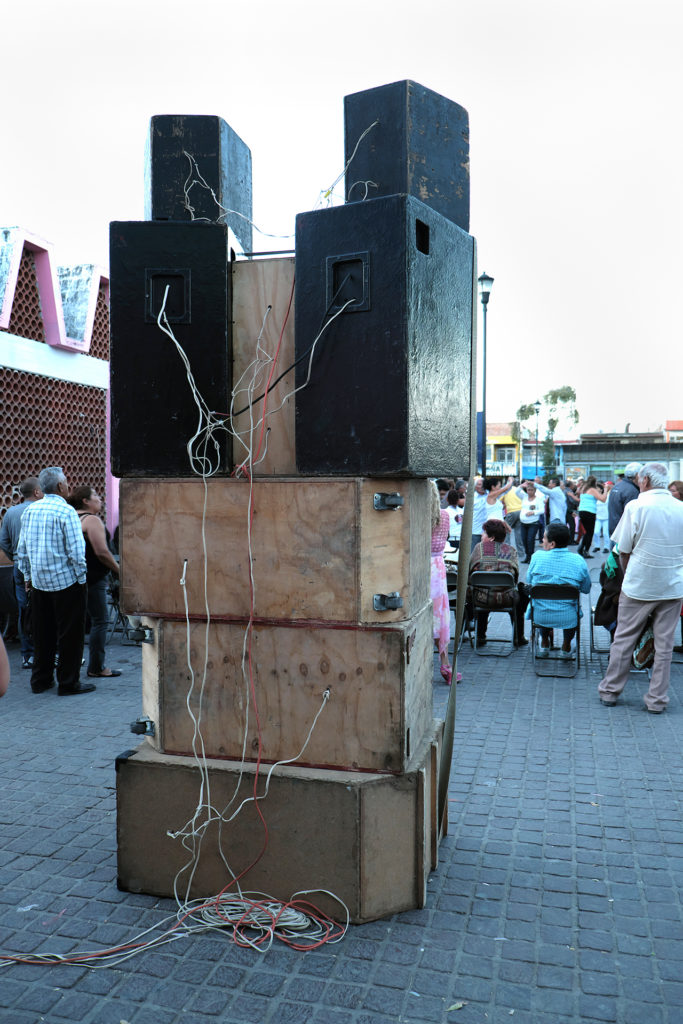 A sound system dance on a square in the San Miguel neighbourhood, León (Guanajuato, 2015)

A neighbourhood dance on a square during a weekday afternoon in León/Guanajuato. We were invited  by Piter Boys, a veteran promoter and organiser of sound system dances in León. That afternoon, telling us about the beginnings of the sound system scene in León, he had pain in his knee, and he stressed the curative aspect of the dances in a very concrete way: the knee forgets to hurt when dancing. 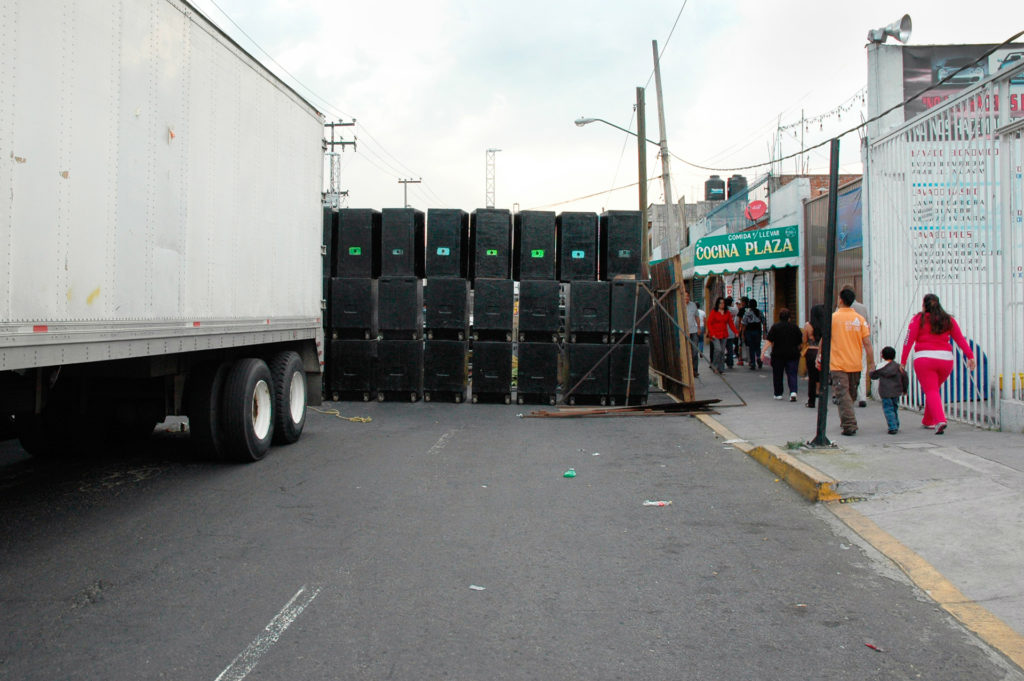 Sonido Amistad Caracas was founded by Ariel Pérez in the 1970s. After his brother’s death, Victor Pérez continued to run the sonido. A couple of years ago he lost a big part of his sound system in a in a road accident, and had to start play on other people’s sound systems – they call it cabinear. But a sonidero is an owner and operator of sound system, not a DJ. In the case of a big sound system, being an operator is a full-time job, and it is run as a proper business, including employees. Smaller sound systems are mostly run as side jobs. Apparently, Victor Pérez is now back on the scene with his own sound system, and keeps the business going with his sharp and clear voice. 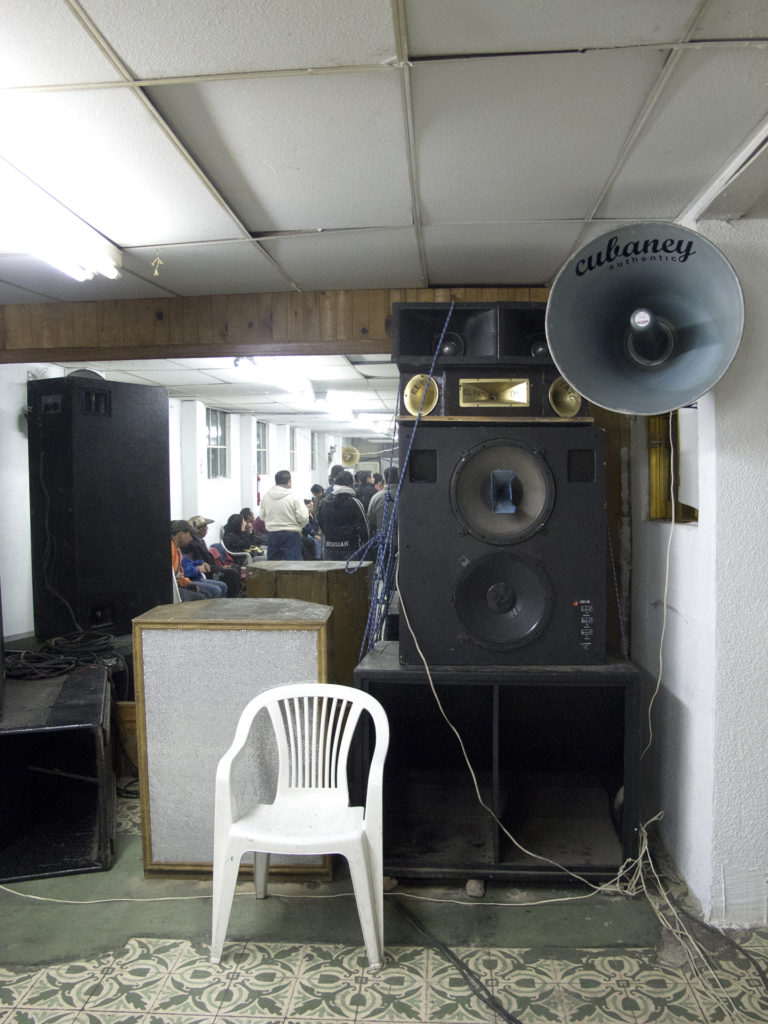 A dance at the Salón Lerdo Chiquito, in the Guerrero neighbourhood (Mexico City, 2013)

Lerdo Chiquito is a small local dance hall, and it was the venue for a regular Friday dance  organised by Sonido Pancho. The idea was to bring together sonideros from an earlier generation of sound system operators in order to play their LPs. For some time, the focus of many sonideros has been focused into investing  more and more into the size and power of their sound systems, more than into the music. So this series of events aimed to go back to the beginnings of the sound system scene in Mexico City, when the focus was entirely on the music. 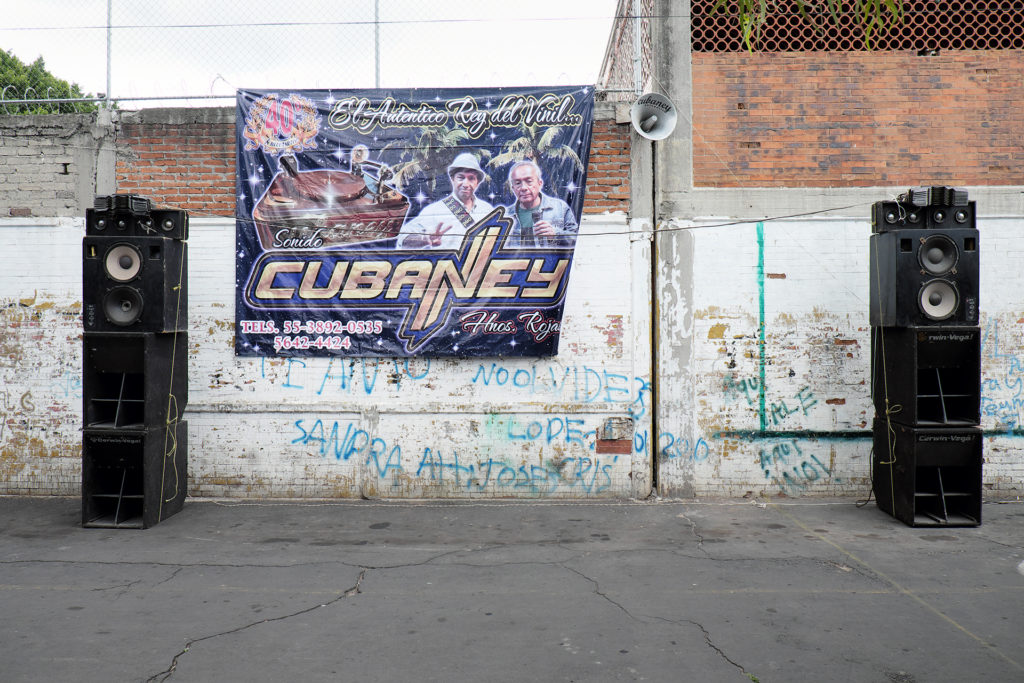 A dance for the 53rd anniversary of the Unidad Rastro Market, Canal del Norte (Mexico City, 2016)

This was a dance for the celebration of a neighbourhood market in Mexico City. Héctor and Javier Rojas of Sonido Cubaney are among the pioneers of the sound system scene in Mexico City. Still passionate collectors of vinyl records, they spin their LPs on a Garrard turntable, traditionally favoured by the sonideros. Nowadays Sonido Cubaney is playing their music mostly at small dances. 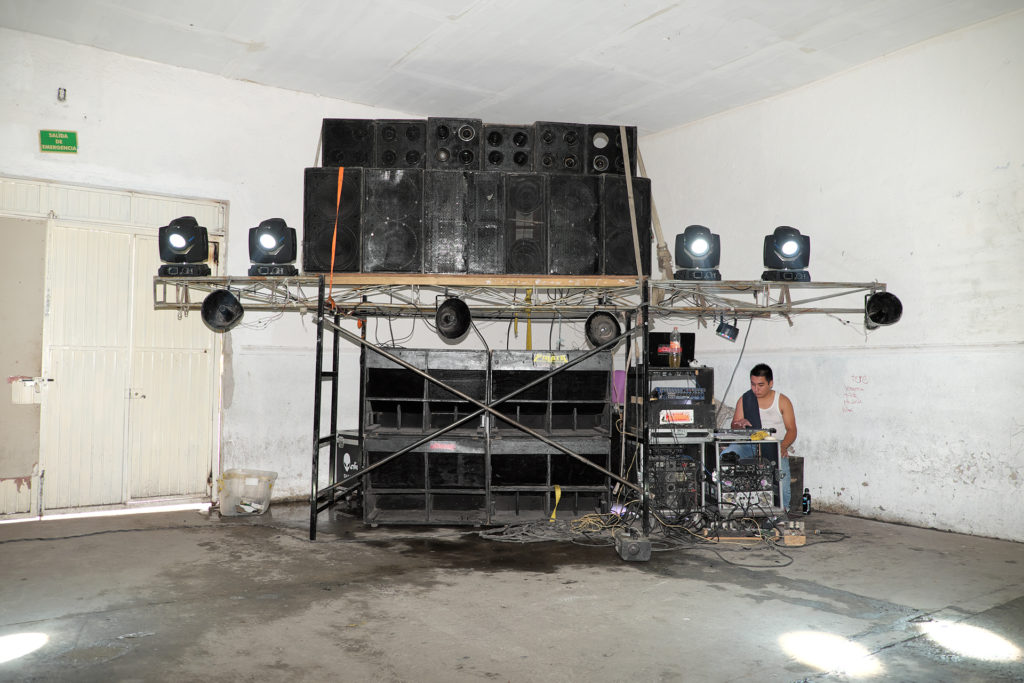 A regular Sunday afternoon dance under the flag ‘Baile sin violencia’ (‘Dance without violence’). Several sonidos, among them Pirata, Sonido Pinky, Sonido Royal, Rey Sabanero and Sonido Libertad, were organising these dances in order to stand up against the rising violence experienced at the sonidero events – mostly due to rivalry between gangs. The ‘Bailes sin violencia’ used to take place in the afternoon and did not run until late, and there was no alcool for ale. The sonidos were battling each other: they would build up their own sound system to form in a circle and play in turns one, trying to win over the crowd. 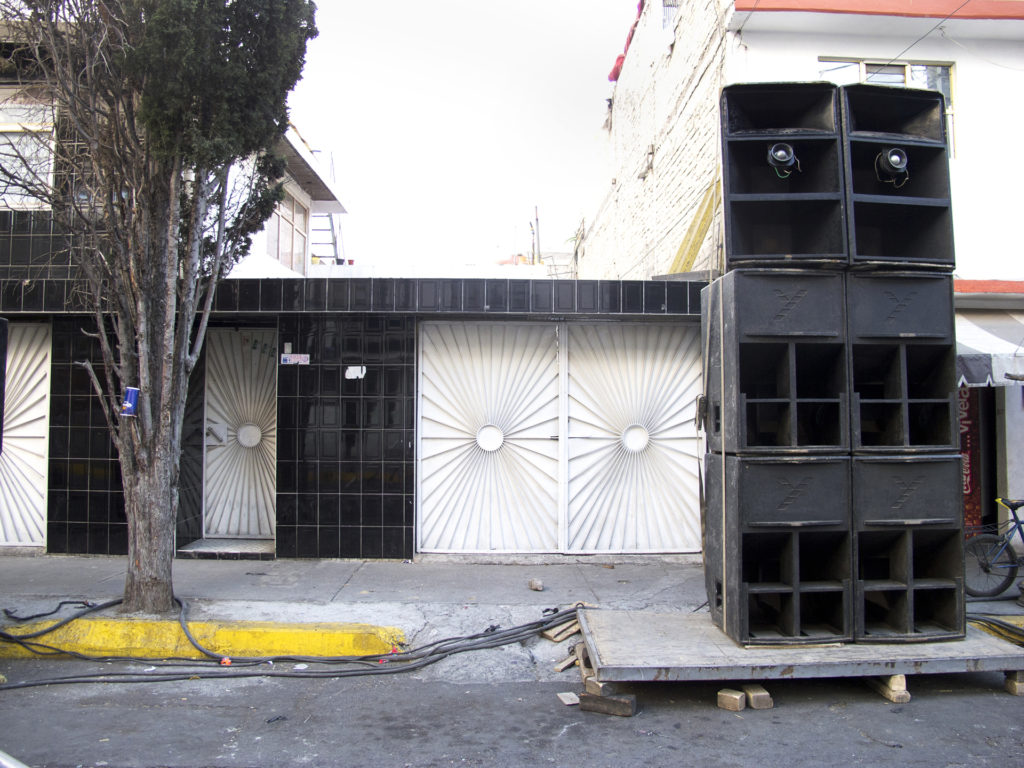 My early connections in the sound system scene were with the Perea dynasty; mostly with María Luz Perea aka La Morena, a talented MC and daughter of Manuel Perea of Sonido Fascinación – and with her cousin Pedro Perea, owner of Sonido La Conga. Founded in the beginnings of the 1990s, La Conga became one of the leaders in the sound system scene and it is still very popular today.

Mirjam Wirz is a photographer, artist and researcher born in Switzerland. She lived in Lithuania (2001-2009) and Mexico (2010-2018). She is the author and editor of the series of books ‘Sonidero City’ (2013-2019) on Mexican cumbia and Sobre El Rio (Passage 2019) on Colombian cumbia. She currently resides in Colombia.