There are so many ways in which legacies get overlooked in a world where the concept of the ‘archive’ is often read as static and lifeless. In this post, we seek to breathe life into the legacy of Hedley Jones whose contribution to Jamaican music has enabled not only technological shifts but collaborations to further excavate the magic of Jamaica’s musical assets in a global context. The partnership between the Sonic Street Technologies project and the Institute of Caribbean Studies & Reggae Studies Unit including the upcoming 7th Global Reggae Conference (February 16-19, 2022) at the University of the West Indies has provided a space to focus even more attention on the solidification of the Jamaican music archive.

Jamaica in the 1940s was teeming with the vibrancy of Mento, Rhythm & Blues, and the ferment of variables which came together to centre celebrations around music, especially on the street. Markets were alive and well and town centres, though not the spaces for nightly events, were points of convergence for performance cultures around music. Live bands that were popular with acoustic emphasis in both the rural and urban areas were now giving way to technological shifts toward electronic innovations for the projection of sound via radio, rediffusion boxes, turntables, microphones and loudspeakers.

In this same decade, Jamaican musician, audio engineer, inventor and businessman, Hedley Jones, decided to find a way to draw the attention of passersby to his store to purchase records. In 1947, Jones used his knowledge and expertise in radio engineering and instrument construction to build what is known today as the Jamaican sound system. Little did Jones know that his mechanism for marketing would change the world of music and the history of sound technology forever.

Hedley Jones – Jack of All Trades

Hedley Jones was born in St. Catherine, Jamaica on November 12, 1917. An inventor from his youth, Jones made his own cello at the age of fourteen. Jones described himself as “a jack of all trades,” pronouncing that he could in fact, “fix everything” (Jamaica Gleaner, 2006). He worked as a tailor, cabinet maker and he would repair sewing machines, radios and gramophones all before he joined the Royal Air Force as a radar engineer in 1943. 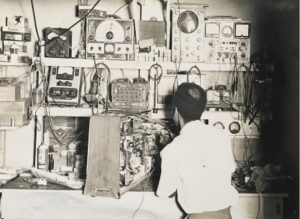 Before Jones joined the Royal Troops, he gained notoriety in Jamaica for one of his premier inventions. As a tenor banjo player, Jones became interested in buying a jazz guitar from Gibson’s Guitar Company. When he worked out the logistics of price and importation, Jones opted to try his hand at creating one himself. He succeeded in constructing, from scratch, what proved to be one of the first solid bodied electric guitars, made from pure Jamaican mahogany. This instrument was recently exhibited at the Jamaica Jamaica! music exhibition at the National Gallery of Jamaica which opened in February 2020. According to Jones’ front page article featuring this guitar, “its principal feature was its electro-magnet pickup which was made up from a pair of horseshoe magnets and a number of stove bolts” (Jamaica Gleaner, 1940). Jones was then commissioned to create more of these guitars for musicians across the island. 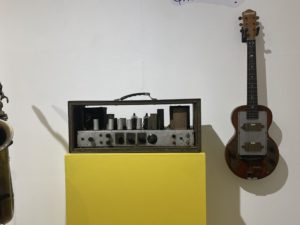 Prior to this, Jones built powerful amplifiers. Jones took note of the fact that the PA systems built before World War II were aimed at satisfying a circumscribed set of needs and thus had a limited range of audio frequencies for vocal and other purposes. Understanding these limitations, Jones designed a sound system in Jamaica to account for low surface noise, distortion and high fidelity, over the entire audio frequency ranges from 15 Hz to 20 kHz which made a significant difference technologically to the music scene. The Jones High-Fidelity audio amplifier model of 1947 performed the full function of reproduction of the entire audio spectrum and came to influence the sound system scene. With his experience making instruments, fixing radios and the formal training and knowledge of radio frequencies he gained as a radar engineer in the Royal Air Force, Jones was well on his way to being known for far more than just his guitar work.

In 1947, the first sound system was built by Hedley Jones. Jones had constructed a hand-built amplifier purely out of his self-interest as a businessman. He wanted to find a way to amplify the sounds of the records he sold outside of his record store, Bop City, in Kingston, Jamaica. He had not imagined that this invention would spur a whole new cultural phenomenon.

Jones noted in an interview with Red Bull Music Academy (2019):

“I wanted to use the new technology to design a new type of amplifier that would respond to all audio frequencies. I relied on my acquired knowledge in the Royal Air Force and used that to design my circuitry. I wanted my customers to hear as closely as possible what they would hear if a band was playing in front of them.” [2]

This was Jones’ motivation. He succeeded in designing circuitry that enhanced the low frequencies, the middle frequencies and the high frequencies as separate entities and then remixed them. Noisy PA systems which commonly defined the sound apparatuses of the day were no longer the choice for music playing after Jones’ intervention took hold.

Tom ‘The Great Sebastian’ Wong is said to have been the first to acquire a Hedley Jones High Fidelity model amplifier that defined his sound system. Legend has it that Jones’ amplifier was blasting his records so loudly that it trumped the actual entertainment event happening across the road. The event was hosted by none other than hardware store owner and DJ, Tom Wong, eventually dubbed within the sound system scene, ‘The Great Sebastian’. Outshined by Jones’ invention, he requested one for himself. Tom Wong is credited with creating the name ‘Sound System’ for this amplifier. Wong went on to not only become Jones’ first customer of a sound system but owned what was the first legitimate, commercially successful sound system. During the 1940s Tom ‘The Great Sebastian’ was the most popular Sound system operator. 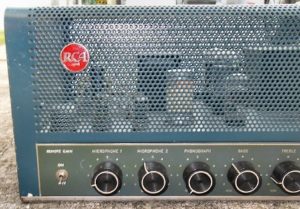 Naturally, with an emerging sound system culture, Jones built sound systems for rival DJs and sound operators in the 1950s following Wong’s endeavours in establishing the popularity of dance parties. Among them were legendary producer and sound system operators such as Arthur ‘Duke’ Reid of Trojan sound system fame who became the most popular, and Clement ‘Sir Coxsone’ Dodd whose Downbeat sound system was a popular system. Along with King Edward’s Giant, these sound systems made up what became known as “the Big 3”. Jones was also eventually contracted Clement Dodd to construct hardware for Studio One, the legendary recording studio.  Jones has been credited as Jamaica’s most significant sound system electronics pioneer creating the hardware that stood at the forefront of the sound system movement.

Hedley Jones explained the technology of the sound system in his 2010 article published in the Caribbean Quarterly entitled, “The Jones High Fidelity Audio Power Amplifier of 1947.”  He noted that the sound system operators of the time, including Count Goody, Count Nicholas and Tom Wong “used RCA PA systems with very limited audio range, and they were made for voice reproduction with output mostly through steel re-entrant horns as speakers. Where there existed a cone speaker, it was a small unit in a no-vent wooden enclosure hung from any convenient structure” [3]. Jones understood the limitations of this technology and used his expertise to develop a much more powerful structure. 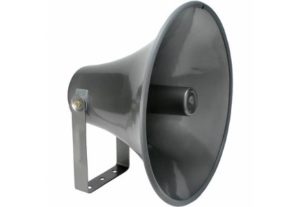 What did Jones use in constructing this first sound system? He noted, “I needed top-class reproduction, so I immediately imported two eighteen-inch English Celestion bass woofers (speakers) and half a dozen of the twelve-inch, heavy-duty variety.” He went on to say, “I mounted the woofers in bass reflex cabinets that I had constructed for them and turned to my trusted power amplifier designs to set them alive” [4].  Jones designed an amplifier that was of split spectrum design and powered by two RCA 807 power pentodes in a 120-watt class AB push-pull output configuration, as described in his 2010 article.

Jones explained that the pre-amplifier section was built around active filters designed to split the audio frequency spectrum into three overlapping frequency components which were then fed into parallel-connected double triode cathode followers, each with their individual volume controls. What this approach did, according to Jones was, “eliminate the need for the proverbial tone control and the raucous surface noises that emanated from the old PA systems with their high audio hum,” [5]. Without realising, Jones created the modern split-spectrum active-filter equaliser.

The technology used in the original sound systems developed by Jones in 1947 began changing and the sound system technology as we know it today became more prominent. By the 1970s newer technology was introduced to the sound system model including a second turntable, crossfader mixer and headphones for the selector. Not only has there been a shift in technology but in Sonic Bodies, Henriques explained that the look of these systems also began to change with size and structure no longer necessarily being synonymous with how well a system worked.  “With current electronic technologies… form no longer follows function, but rather tends to be microscopically simulated within identical anonymous grey boxes,” Henriques noted [6] .

Henriques added that, unlike many other technological products, the sound system’s technologies have changed based on the users and participants and not by an external party creating new trends. The changes in the sound system make-up are primarily based on what technological and cultural progressions are taking place within the dancehall scene. “…the latest hit sound, artist or dance craze to sweep the island – consolidate and innovate in equal measure: preserving the tradition of what had gone before and at the same time introducing something new and different” [7]. Therefore, as the systems change they are still mostly rooted in their origins.

While sound systems today may look and even sound very different from the first amplified sound created by Hedley Jones in 1947, their cultural and sonic significance remains. Jones will forever be credited with developing the catalyst that has changed the way we listen to music and entertain forever.  Jones engaged in what Dennis Howard described as the Tek-no-li-gy (taking new knowledge) process. He extracted from existing Western technologies, created new knowledge and practices beyond what they were intended for “through a process of hybridisation, innate inventive capacity, the creative intellect and the creative imagination…” [8]. Jones died in 2017 a few months short of his 100th birthday.

The sound system essentially gave birth to the Jamaican recorded music industry as it exists today and changed how music is consumed globally. Jones’ legacy will remain through his inventions and influence and his prototype has and will continue to be copied and re-constructed for decades to come.

Dennis Howard is a scholar and music historian with over 35 years experience in the creative industries, during which he has held several positions at various media houses in Jamaica. He’s a former entertainment journalist, radio presenter, television producer, and record producer.

Ashly Cork is a Jamaican writer, researcher and consultant for cultural projects. Her work is particularly focused on Jamaica’s cultural and creative industries with a special interest in music as a cultural practice and the global migration of it as such.