Huddersfield: The Making of the SST Case Study


Huddersfield is a town in Yorkshire in the north of England where the Caribbean diaspora has a long-standing presence. For a brief period in the 1980s, it has unexpectedly developed into one of the key centres of sound system cultures in the UK. Our research agents in the area, Mandeep Samra and Gopal Dutta conducted a case study looking at the entangled histories between different local communities and ethnic groups that sustained sound system culture in Huddersfield at that time. In this blog, Gopal Dutta takes us through the process by which he conducted this case study and what he learned from the process.

My way into sound systems is really through my interest in jungle and drum and bass music. I was a big fan in my late teens and early 20s, it was the sound I clicked with most in that period. Growing up in Huddersfield, and through my time in Cambridge for university, I became deeply embedded in the worlds of jungle and drum and bass, so sound system culture has always been around the corner from me, both geographically and culturally.

I have known my co-researcher, Mandeep, for several years and we’ve worked together on lots of different film projects. When Mandeep started up the ‘Sound System Culture’ project in 2013, she recruited me to work on the project as a volunteer. I attended a few of the many interviews, transcribed some of the recordings and advised on the setting up of a SoundCloud page to host some of the recordings.

It was a great process. A lot of the sound systems we were investigating had their origins in the small part of Huddersfield, Fartown, where I had lived most of my life, but I had known nothing about them. I am of course of a different generation so it’s understandable, much of the activity was in the 1980s when I was a child!

It was also really good fun to tour the project to a few different carnivals and Mandeep also booked a coach to take us all to the Notting Hill Carnival in London.

The current SST case study on the Huddersfield scene came about as Mandeep asked me if I would be interested in taking part, as she had been approached by the SST team. For the previous project, our focus had been the social and cultural aspects of the sound systems, but this project had a different focus, around the way sound system technologies were used to build and empower communities.

Mandeep asked me if there were any elements of the previous project that I would like to revisit. I’d always been fascinated by a remark made by Mark Iration, of the Iration Steppas sound system, based in Leeds. He said that the best sound in Huddersfield, in the 1980s, in his opinion, was Earth Rocker. And when we interviewed Orvelle “Bigga Puss” Pusey of the Shakatone Esquire Sound in Huddersfield, he also talked about how good Earth Rocker was. And he explained that a key element to their prowess was due to a technical innovation they made, where they used a “three-way crossover” unit, in contrast to the “two-way” system used by most other sounds in Huddersfield at the time. The three-way allowed for a greater distinction between the high-pitched vocals and the mids and low tones of the bass. So, this meant that you could have a very strong, deep and pronounced bassline alongside a floating vocal. And this was the pinnacle of sound for me, it’s something I love and always look for in music, that contrast.

So, Mandeep and I decided to focus on this element. We also wanted to investigate the role of the internationally famous ‘Matamp’ company and how this fit into the picture. In the original project, the name of Hans Alfred ‘Mat’ Mathias (founder of the Matamp company) came up a few times but as the name was more associated with other styles of music, we had not investigated the role of Matamp within the sound system scene.

In terms of the crew to collect the oral histories, we agreed that Mandeep and I would share the job of interviewing and we recruited a filmmaker, Zoe Opal East, who Mandeep had worked with previously. We spent a lot of time on Zoom calls with the SST team – Julian, Brian and Aadita. These meetings were useful, allowing us to clarify the questions we decided to ask each contributor. We also decided the technical specifications for the video and audio recording in these meetings.

In terms of the process of organising the interviews, I largely left that to Mandeep. She already knew many of the contributors we wanted to contact, as she had previously established a relationship with them for the other Sound System Culture project. And Mandeep is just generally very good at planning and organising. We tried to interview at least two different people on each day, on order to optimize the workflow and each other’s schedule. This proved tricky at times, and we needed to do a little juggling with dates.

We arranged our first interview with Jeff Lewis, the current owner of the Matamp company. Visiting Jeff’s workshop was an eye-popping experience. The place was packed with bits and pieces of equipment, transistors, and other tiny components, as well as the larger amplifier units ready for shipping. We also got to see Jeff’s lathe cutting machines and boxes of 7-inch records – 30,000 in total. 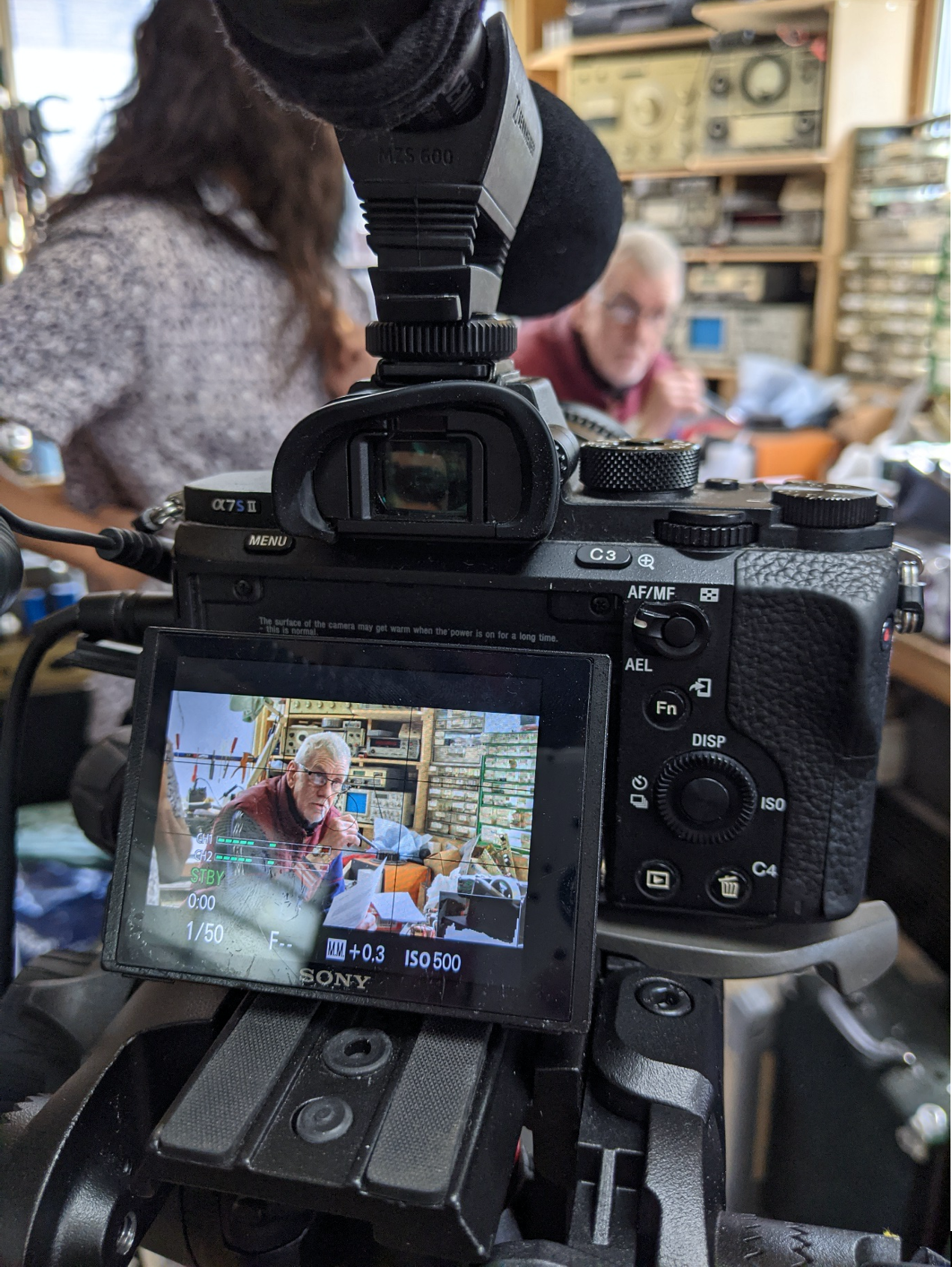 Jeff Lewis through Zoe’s camera, with me visible in the foreground.

Jeff explained that almost every club or venue in Huddersfield would have been fitted out with Matamp kit from the 1960s onwards, as it was reliable, good quality kit equipment. But he was unclear about any specific associations Mat Mathias may have had with Earth Rocker’s frontman, Stephen Burke.

So, we arranged to interview Stephen Burke as well, but before that, on the same day that we saw Jeff, we also visited Paul Huxtable in his studio. Paul is a sound system owner and builder specialized in vintage music and equipment. He gave us a lot of useful technical information with regard to how a sound system works, useful for me just so I got a stronger idea of how all of the different components fit together. Paul also reiterated what we already knew about Matamp – that it was regarded as high-quality equipment but was very expensive, so most likely to be used by sound men second-hand. 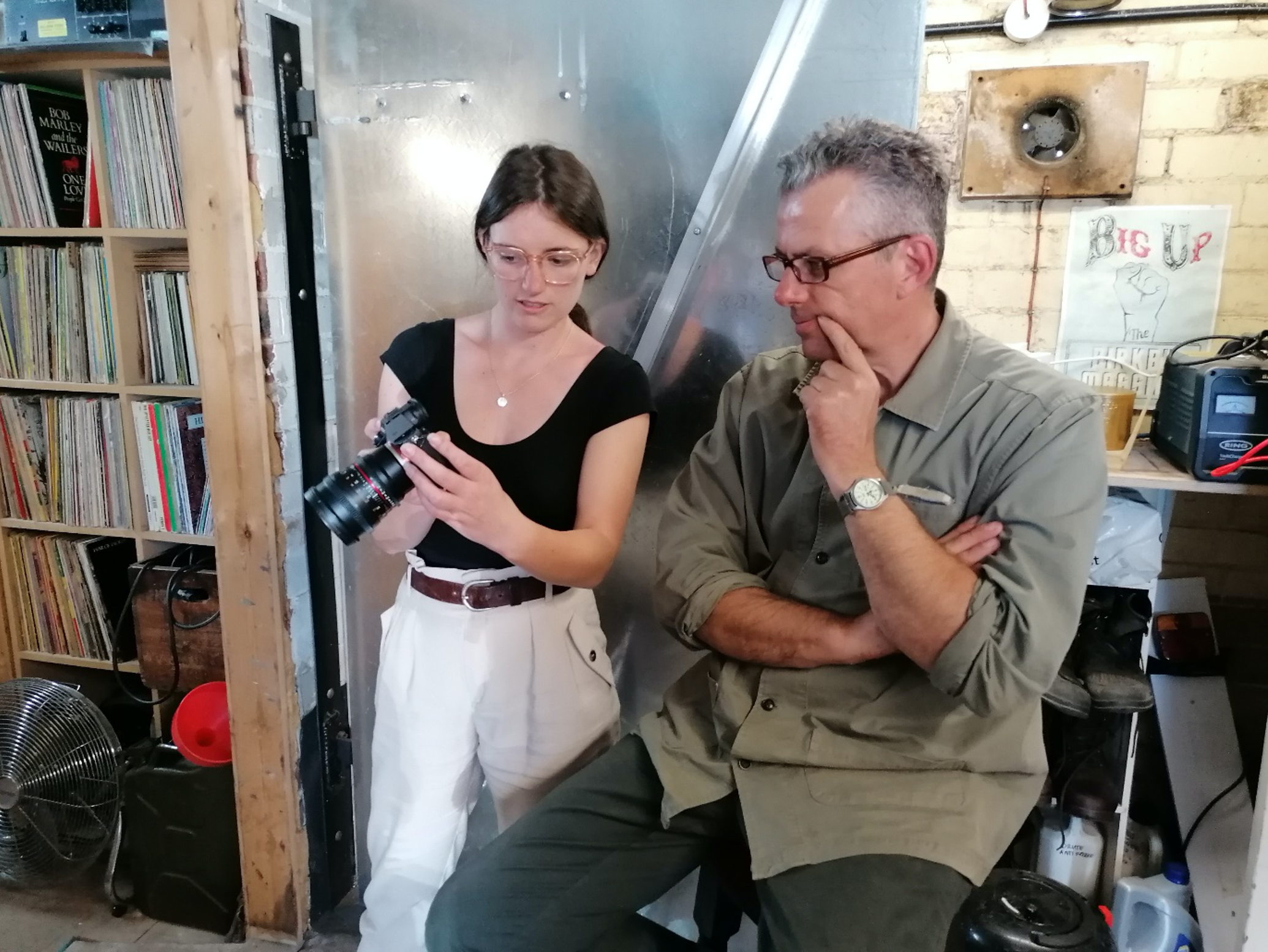 The following week, we interviewed Dee Bo General and Riddim Master, who were involved in the sound system scene of the 1980s (and are still involved today). This interview helped to flesh out Mat’s connection to the scene. The most unforgettable bit was where Riddim stated “Mat was a black man…who looked white.” We got a real sense of how helpful he had been for fledgling sound men of the 1970s and 80s, but there was also a wider point made by Dee Bo, about how lots of different local “experts” were helpful, including staff from the Dandelion guitar shop and also a lady with a shop on King Street who knew all about valves. 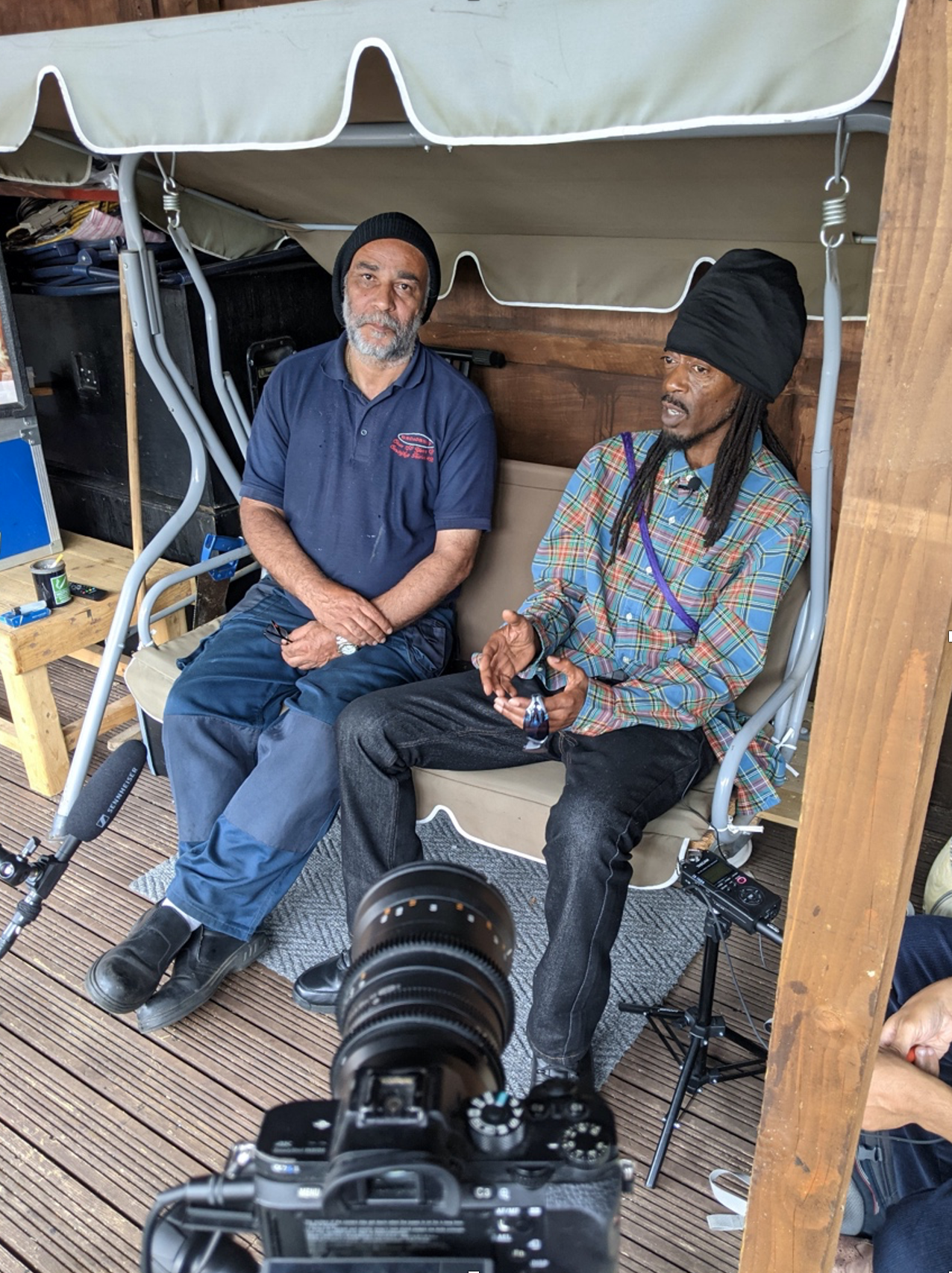 We then spoke with Artnel and Neville Johnson later the same day, who confirmed that all of the equipment at the Venn Street nightclub, known as ‘Silver Sands’ in the 1980s, was all from Matamp and was custom built for the venue. And we also found out more information about how the club was owned by an Indian family and rented out to the Caribbean community. This is something Mandeep had already discovered, but we now had confirmation from one of the only surviving members of the original group of people who ran Venn Street. 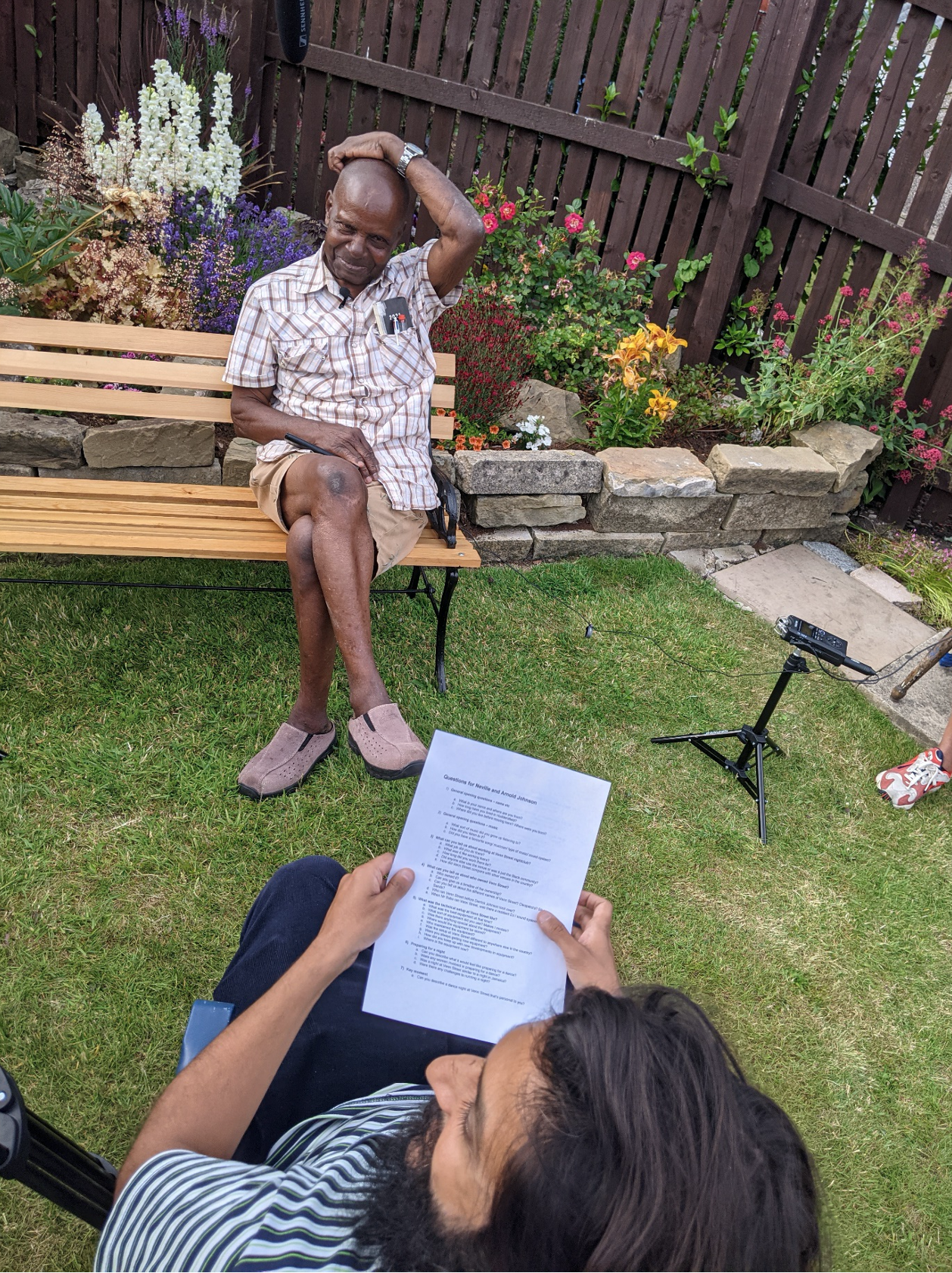 Artnel Johnson being interviewed in his garden by me

This day of interviews was very memorable – on both occasions, we sat outdoors to be mindful of Covid regulations. We were lucky to have good weather and we chose to interview the contributors in two shots, to create a sense of conversation and also to put them at ease.

The interviewees were very welcoming and the stories we collected from them felt like important pieces of the puzzle.

The next interview with Stephen Burke saw us travelling out of Huddersfield, down towards Luton which is where Stephen is now living. We interviewed Stephen in his current workshop, and he offered us a sneak peek of some speaker boxes he was building for a client. He explained how he had created a curvature of the wood within the boxes, to allow the sound to travel in the optimal way. Stephen’s interview was as fascinating as the others we had already recorded.

By this point, we had a good sense of the story we wanted to tell, but Stephen was able to provide us with the crucial information about his relationship with Mat Mathias and with other experts such as Pete “Woody” Wood, who built the three-way crossover unit for Earth Rocker.

We subsequently spent a lot of time trying to find Pete Wood but drew a blank with all our enquiries. We finally found out that he had sadly passed away some years ago.

Our final two interviews were organised after further discussion with the SST team over Zoom. We had by now got enough information from all the previous interviewees to be able to tell a coherent story about the relationship between Mat Mathias and the sound system operators, in the space of the Venn Street Night Club. But we wanted to flesh out some of the details around the ownership of the club, so we arranged to speak with Balbir Uppal, a member of the Bhullar family, who owned the club. Balbir was able to confirm the information we had from Artnel and Neville and gave us a sense of the co-operation that existed between the different non-white communities within Huddersfield.

After seeing Balbir, we spoke with Yvonne Witter, to get a sense of the view from the dancefloor. Yvonne had been to many nights at Venn Street in the 1980s and remembered the impact of Earth Rocker, so it was a nice way to end our series of interviews.

We now had a huge amount of material and we arranged through the SST team to have all the interviews transcribed. I then went through all the text and drew out the various themes that had been discussed, for example, technical information about Sound Systems, Venn Street, the role of Matamp and so on.

Around Christmas of 2021, we had a very useful meeting with the SST team, who suggested a way to structure the report, which made the job of distilling the interviews much easier. We went through a few different drafts and reached a point in February 2022 when everyone was happy with the report. Hopefully this will soon be published in full and more people will be able to learn about the story of Huddersfield’s Sound Systems and their relationship with Matamp.

I hope that this ethnographic experience will be encouraging for other independent researchers to go out and investigate their local sound system scenes. It’s been a great way to meet and talk to people I would not normally have much contact with, despite us living in the same area and sharing similar interests. It’s been a way for local history to come alive to me and give me a sense of connection to the place I’ve grown up in, particularly because the original Venn Street building was demolished and the location is now a car park, so the memory is not directly visible in the town centre. Mandeep and I would now really like to work towards claiming a blue plaque for the venue and we hope this ethnography and report will help us achieve this goal.