In the spirit of outernationalism for Sound System Outernational #8 SST asked for a report on the event we sponsored from Marcus Ramusyo Brasil, one of our Brazilian research collaborotors. This day long marathan session – from 10.30 am to 10.00 pm – was very well attended with about 150 participants, more than thirty of whom made up the panels of UK sound system owners, selectors and other professionals on the scene. So, the SSO #8 reasoning was done strictly between practitioners with researchers only taking part as members of the audience. In line with our developing the SST practice-as-research methodology, this contrasts with SSO gatherings up to now where researchers had an equal role. The day was filmed for sharing back an edited version with the participants and on YouTube. Judging by the social media comments from the UK sound system community – see the link at the end – the event was very well received. At the same time it also made a valuable contribution to our research. 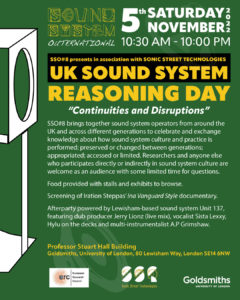 The eighth edition of the Sound System Outernational took place on Saturday November 5, 2022, at the Professor Stuart Hall Building, Goldsmiths, University of London. It was billed as UK Sound System Reasoning Day: Continuities and Disruptions. My name is Ramusyo Brasil, I am Brazilian, and I come from the Island of São Luís, in the State of Maranhão, known in Brazil for being the Brazilian Jamaica. In my adolescence, more precisely when I was 14 years old, I lived in the São Francisco neighborhood, on 2nd street – like Giga! The local reggae culture was ingrained in my soul, until I became a bassist and later reggae researcher, publishing two books and other articles on the subject. But I’d never visited London before and I came especially for SSO #8, so I’m making this little preamble to say that I know little about the local sound system scene. What I can say about what I heard and saw is more on the sensitive plane of experience, rather than providing readers with historical or topographical information about the UK sound system scene.

What I felt in with the little contact I had with the sound system scene in the UK is that it is very close to what we have in Maranhão-Brazil. Marinated there by the sweat that seeps from the pores due to the heat of the equator and here in the UK by the drizzle that doesn’t stop falling, both in a state of volatile precipitation (one drop), as well as the sound and ambience, carried by the insular winds of England and São Luís, blessed by Jamaica and Mother Africa. Perhaps only places surrounded by water on all sides can point to a reterritorialization in deterritorialization, due to the indelible need to navigate, make contacts and have someone to exchange with. In this way, the term “outernational” makes perfect sense, the idea of a stateless nation in an eternal movement of reconquest of an auspicious becoming. Jah bless! 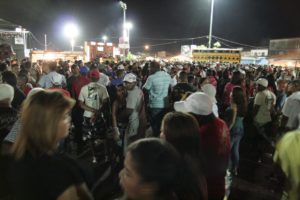 The day of thinking began with the sound of the Unit 137 sound system and refreshments providing an occasion for the most interesting and companionable conversations that take place around food and drink – heartened and therefore deeper. On the walls of the atrium of the Professor Stuart Hall Building were two important and thought-provoking photographic exhibitions. One was entitled “Sisters in Sound”, about the recognition of women’s work in the UK sound system. The other exhibition, called “Let’s Play Vinyl – Celebrating the New Generation of UK Sound Systems,” shows the beautiful architecture of UK sound systems within the landscape, in the sense that Diderot gives to architecture: the place where all other arts are contained. Sound system is sound, music, image and performance. To complete the feast, there was also the book tent The Word Bookshop and the Papa Face vinyl record shop, in addition to the innovative BASSIbike project, by Lionbeat. 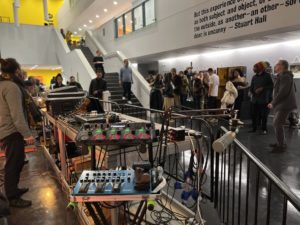 The main idea that guides Sound System Outernational, and which has been very clearly stated in this edition, is that the real knowledge lies with the practitioners and agents of the sound system culture. The academy needs to understand and operate in the sense of listening more than talking, from the broad perspective that there is a gnoseology present in the sound system culture, a philosophy, a religiosity and a way of being-together in the world. It is the subtle passage from the simple to the complex, as such knowledge occurs at the intersection of different types of knowledge, which take place in sensitive exchanges, in the vibrations of the sessions, but also in the shared corporeality, raising the notion of an individual-collective, composed for the great social power of mobilization of sound systems, but also for the transcendence of the subjectivities at stake. Such relationships can raise questions about ethnic knowledge passed down through generations, in what Muniz Sodré called Nagô thinking, in a reconfiguration of knowledge coming from Africa, something he names, inspired by Alan Badiou, “guarding the event”.

This “guarding the event” evidently implies a group memory, which can be described, in the manner of the sociologist Maurice Hallbwachs – a disciple of Bergson and Durkheim – by traits of collectivism (a synoptic view of individual memories), presenteeism (the representation of the origin depends on the here and now) and spatiality (representations are raised by the construction of a specific territory). 2

My initial plan was to spend half the time in the Veterans session and then go to the Youngers session, but it was impossible to leave the room, I was completely carried away by the feeling and vibes of the Veterans’ testimonials, extremely sensitive lines from legends like Neville King and Gladdy Wax, among many others. At the end, three questions were prepared by the older panelists to be asked to the younger ones, in the afternoon sessions, in which the intergenerational dialogue would take place. I must confess that I thought several times about declining organiser Natalie Hyacinth’s invitation in view of my imperfect English and my lack of knowledge of the local scene. But that conversation between the veterans seemed so familiar to me that I felt at home. So, I decided to follow the advice of Deleuze, for whom the class teaches more with what we have lost than with what we have captured, causing us to rationalize beyond of what was said and understood. This leads us to experience the universe of perceptions and impressions. At lunchtime, in addition to the light and healthy food from Pristine Eats Catering, our souls and ears were fed by a great set from Nzinga Soundz, formed by the wonderful DJ Ade (Lynda Rosenior-Patten) and Junie Rankin (June Reid). 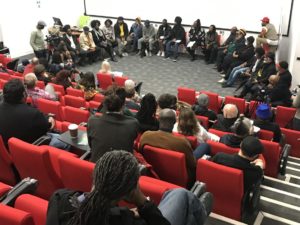 Veteran’s panel in the morning

In the afternoon began the two parallel sessions that each brought the Youngers and Veterans together in the same space, to exchange impressions, as well as three questions from the youngest to the oldest, and three questions from the oldest to the youngest. These sessions were mediated by Mykaell Riley and Professor William ‘Lez’ Henry. I believe that this was the most interesting and perhaps the most tense moment of the program. It was also the most valuable, however. The older to younger issues were strongly related to how the younger ones are going to spread the message, the relationships between Rastafarianism and sound system culture, etc. The younger ones asked how the older ones take care of the safety of their audience in the sessions, especially women and LGBTQIA+.

Without a shadow of a doubt, the issue of safe spaces was the most heated moment of the debate, but also the considered one, in the sense that it is through the different ways of operating thought that one manages to leave the place where we are – and go a little further. Colleague Jean Christophe, a French member of the SST team cited Jacques Rancière’s notion of dissent. With this politics in its broadest sense takes place through the recognition of the discourse of the other as different from yours, but in this apparent difference lies the power of being-together, which complements my worldview based on what I lack. This is the deepest meaning of politics, and when this occurs in a respectful and purposeful way, it proves to us that 1 + 1 is always more than 2. 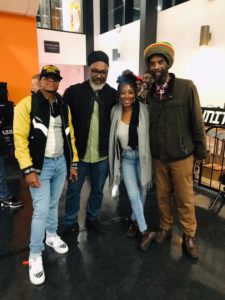 A good summary of this beneficial perspective was the impression of Canadian SST team colleague Alanna Stuart, who told me during the coffee break conversation that there is a great correspondence between Rastafarian resistance and the struggle of women and LGBTQIA+ people, as all these social groups suffer violence. system of Western capitalist, neo-liberal, homophobic, racist, xenophobic and elitist societies. In this sense, the body is what escapes the domains of the constituted powers. In its interior space, in the experience of the sensitive, the being-in-the-world of the sound system culture re-spatializes the ground on which it stands and retemporalizes the linear time of unbridled capitalism. Thus, linear time is replaced by the cyclical time of sound, making different struggles from different historical times converge to the now of the lived, in the eternal potency of the coming-to-be.

After the parallel sessions between the youngers and the veterans, there was the final plenary session in which the questions and debates presented in both rooms were stitched together. From the point of view of the methodology used and the shared knowledge, it can be stated that the modus operandi of SSO #8 is was really non-extractivist, as it was aimed to be by both the SSO and SST team. The knowledge is in the room!

A documentary about Iration Steppas and afterparty After dinner, there was the screening of the film Ina Vanguard Style: A Documentary On Iration Steppas, with a question and answer round for the group’s bassist, Dennis Rootical. At the after-party there was also the comfortable melodious sounds of Unit 137 with French horn player A.P. Grimshaw together with Hylu, Jerry Lionz & Sista Lexxy. 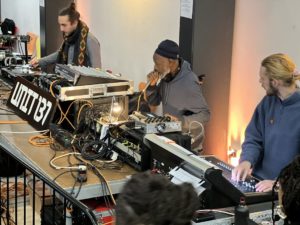 Last but not least we had the after-afterparty at Juke Joint Jamaica with DJs Tiny T and Lucky Cat. In the conversation Tiny T spoke of the importance of different generations playing together, in a process of building knowledge and mutual recognition. He could not finish these few words without praising the tireless work of the SSO organizing committee: Natalie Hyacinth, Christine Hannigan, Mandeep Samra, June Reid and David Katz. Thank you all, thank you for everything!

For a brilliant archiving of comments on the event, see the Young Warrior Instagram link which includes his sum up questions as follows:

📺 WE ARE LIVE‼️
7/11/22
Continuing The Reasoning‼️
My personal responses to concerns & topics raised at the Sound System Outernational 2022 event on Saturday 5/11/22.

– Where are the black children in sound system?
– Have today’s sounds done enough for the next generation?
– Are our dances anymore a safe space for our patrons?
– Does Rastafari still need to be so attached to sound system culture?
– Is the quality of music production affecting us?
– Are sound systems playing too loud playing a part in having no where to play?
– Are the young people Concious enough?
– Is it right for LGBTQ+ Persons or sounds to be excluded from the scene & dances?
– How do we preserve sound system culture?
– Is sound system as it is today relevant or needed?
– Has there been a breakdown in the Sound system model from “Box Boy” to selector?
– What exactly Is “the message” or principals of Rastafari that the elders want the young sounds to keep?
– Has there been a break down between the elders and Youngers in sound system?
– How can the elders pass on or preserve their vinyl collections?
– Online Algorithms affecting event advertising

▪️All of these concerns and points were asked between the elder and younger sound system panels.