The UWI’s Upcoming Global Reggae Conference and its History


SST is excited to be partnering with the Institute of Caribbean Studies and the Reggae Studies Unit for the 7th Global Reggae Conference, to be held at University of the West Indies, Mona Campus, Jamaica, between 16 and 19 of February, 2022.

Over the last fifteen years the Global Reggae Conference has been a great source of inspiration for scholars in the field of popular music and culture as well as reggae fans and professionals worldwide, showcasing the enduring influence of Jamaican music culture and consolidating scholarly work centred around it.

This year’s iteration will also offer the chance to present some preliminary research findings from the Jamaican leg of the SST research, currently ongoing, and carried out by a Jamaica-based team made of Sonjah Stanley Niaah, Dennis Howard and Ashly Cork.

In this blog, leading dancehall scholar Dr. Sonjah Stanley Niaah sketches out the history, the objectives and the critical legacy of the Global Reggae Conference.

The Global Reggae Conference is a biennial event hosted by the Institute of Caribbean Studies and Reggae Studies Unit. This Conference takes place in February, as a key calendar event in Jamaica’s Reggae Month which was declared as a means to honour creators while bringing attention to industry developments and the overall evolution of reggae music. Reggae’s significance on a global level lead to its designation in 2018 as an intangible cultural heritage of humanity by UNESCO.

The 7th staging inaugurates new partnership for the focus on ‘Reggae Films, Reggae Icons, Reggae Music’ in 2022, which will benefit from association with the Perry Henzell Estate and the Sonic Street Technologies (ERC Funded) project at Goldsmiths, University of London. Next year’s iteration of the Global Reggae Conference will be hosted in celebration of the 50th anniversary of the release of  ‘The Harder They Come’, Jamaica’s first feature film.  Considered the Jamaican dub on Robin Hood, based on the main character of the ‘Reggae singer turn outlaw hero’, The Harder They Come was released on June 6, 1972 and became a cult film internationally. 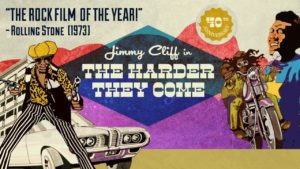 The now legendary movie, featuring reggae superstar Jimmy Cliff as the main character,  was produced and directed by Perry Henzell, co-written by Trevor D. Rhone, and is most famous for its reggae soundtrack, the making of icons, and its portrayal of Jamaican life. Not only did the film take reggae music worldwide, but ultimately, the Jamaican language, ‘Rude Boy’ aesthetics and the ‘unorthodoxy’ of its filmic production. This Reggae film is often described as “possibly the most influential of Jamaican films and one of the most important films from the Caribbean” [1]. Most importantly, The Harder They Come has provided a space within Reggae Studies, Film & Media Studies, Cultural Studies, Gender Studies, and Celebrity Studies among other fields of inquiry for dialogue, criticism, production, academic writings and performance in numerous arenas, which the Global Reggae Conference aims to gather and consolidate even more.

The Global Reggae Conference, first staged in 2008, is the brain child of noted UWI Professor and Literary Scholar Carolyn Cooper. This historic conference was designed to highlight the global impact of Jamaican popular culture, provide a platform for the discussion of reggae’s influence in various cultural contexts, showcase the work of stakeholders including artists, scholars and entrepreneurs and expose emerging reggae talent. Most importantly, it has sought to engage academics and encourage practice in the representation, analysis and documentation of music as a cultural phenomenon with intangible heritage and material significance. Beyond promoting discourse around Reggae’s global significance, the conference also engages with reggae as intellectual property and brand, reggae as subversive practice, sound system practice, and reggae innovation, particularly analysing the theoretical and practical expressions of how innovation has influenced technological advancement, genre development and popular culture. 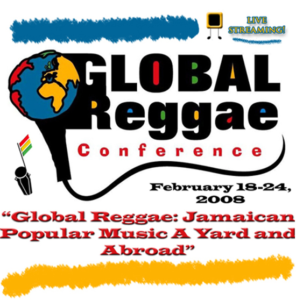 First staging of the Global Reggae Conference at UWI Mona, 2008

Now a landmark event in Reggae’s international calendar, The Global Reggae Conference has featured local, regional and international academics, guests and musicians. Among the themes branding each staging are, Global Reggae: Jamaican Popular Music a Yard and Abroad (2008); Musical Legends and Cultural Legacies (2013); Reggae Innovation and Sound System Culture (2017); and Dancehall, Music and the City (2019)

This event has led to the expansion of scholarship in the field of Jamaican music. Among the key scholarly publications highlighting works presented at the conference are: Global Reggae edited by Carolyn Cooper, Reggae From Yaad: Traditional and Emerging Themes in Jamaican Popular Music edited by Donna Hope, and Dancehall: A Reader on Jamaican Music and Culture edited by Sonjah Stanley Niaah.

It is important to note that the cultural exploration which gave birth to the Global Reggae conferences began in a tradition started in 1996 when the inaugural Conference on Caribbean Culture was convened at the University of the West Indies, on the initiative of Prof. Barry Chevannes to celebrate the distinguished intellectual legacy of Professor the Hon. Rex Nettleford, former Vice Chancellor of the University of the West Indies. The second Culture Conference paid tribute to the Barbadian historian and poet, Professor Kamau Brathwaite. The third Conference on Caribbean Culture provided sharpened focus on a mass movement of popular consciousness and the Global Reggae Conferences continue in this vein today.

The Global Reggae Conference has benefitted from key partnerships including with the Recording Industry Association of Jamaica (RIAJam, now defunct), the Bob Marley Foundation, IRIE FM, the Jamaica Tourist Board, Birmingham City University (UK), and the Ministry of Culture, Gender, Entertainment and Sport, among others.