SST under the volcano: presenting at 4S


On December 8, 2022 I had the opportunity to accompany the Sonic Street Technologies team to the 4S annual conference in Cholula, Mexico. This occasion felt special not only because it was the first time that I would be able to present my research to a wider audience, but also because I would do so in the land that saw me grow, and in front of the guardians that have accompanied throughout my life: the volcano Iztazíhuatl (the sleeping woman) and Popocatépetl… the experience surpassed all of my expectations: in addition to forging relationships of respect and commitment with the team members, the project as a whole demonstrated – at all times – its commitment to the development of ethical research. Likewise, the project demonstrated its explanatory capacity to understand and transmit the value of sonic technologies for sustainability and cultural expression of a diversity of communities in the world.

I found out about the SST project far from my lands when I moved to Marseille, in the south of France, to continue my master’s studies at the Ecole des Hautes Etudes en Sciences Sociales. There, I met Jean Christophe Sevin, who would be one of the directors of my graduate research. It was he who saw the link between my research topic and the SST project. So, he invited me to collaborate as a member of the research team in France and later to present the advances of our regional research at the annual 4S Conference in Cholula, Puebla. 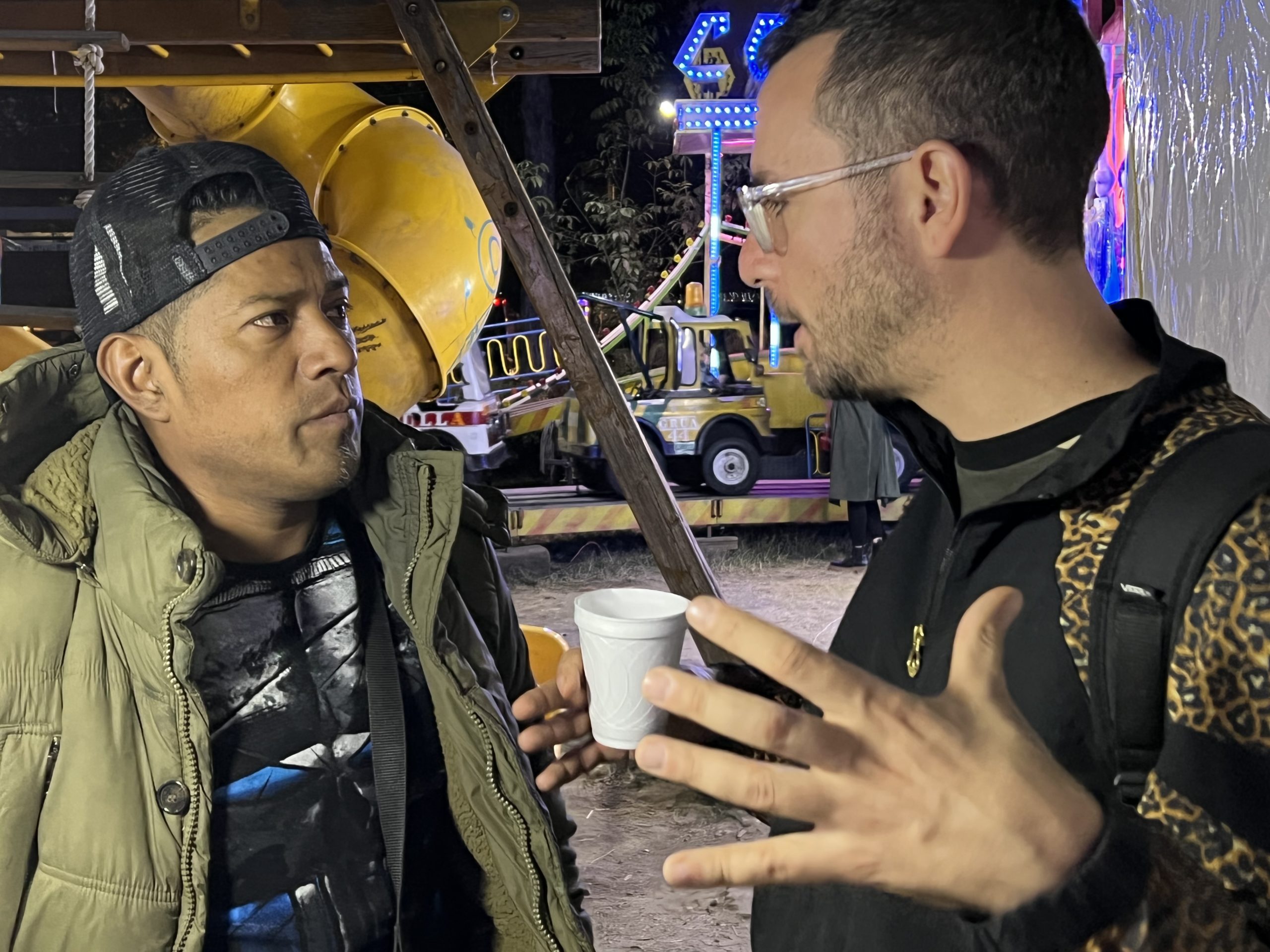 As Aadita Chaudhury introduced in her last blog post, the Society for Social Studies of Science (4S) organises a conference every year where researchers and science practitioners come together to engage in dialogue around technology and society. The theme this year “Reunion, Recovery and Reconfiguration” was addressed by the SST team in three activities: the presentation of the theoretical and methodological foundations of the project, the screening of three commissioned short films, and a practical workshop given by Efren Moreno, owner of Sonido Axel followed by an open-air dance within the university premises. These three activities highlight three key dimensions of the project, which I will develop in the following lines. These are: the explanatory richness thanks to a diverse and committed research team; the research ethics that stems from delineating an ethically responsible methodological framework; and the enhancement of affects.

First activity: fundamentals and explanatory richness based on a diverse team

The participation of the SST team began on Thursday, December 8, when the team occupied room D202 of Building D at the Ibero Puebla. From 8:30 a.m. to 10:30 a.m., the SST team presented in-person and online, the methodologies, advances, and findings of the different elements that make up the international project. Julian Henriques opened the session by introducing the theoretical and conceptual bases of the project. First, sound technologies such as sound systems can be considered as a standardised technology which is re-constituted for entertainment purposes according to the available materials and the particular needs and interests of each community. Later, Brian D’Aquino introduced the methodological and ethical bases for mapping sonic technologies throughout the world. The method refers to radical cartography that seeks to illustrate an alternative narrative on the construction of networks and cultural resistance through responsible collaboration and against cultural exploitation.

This gave way to the presentations of the rest of the team members participating from different parts of the world: France, Brazil, India, Italy, Mexico, Colombia and more. Each presentation expressed the historical and cultural authenticity of each region. Jean Christophe Sevin introduced the comparative method to study the historical trajectory of free tekno and dub sound systems in France. I exemplified the explanatory power of this methodology to study the multiplicity of SST scenes in Mexico. Sonjah Stanley Niaah, Dennis Howard and Ashly Cork extensively elaborated on the technological and cultural development of sound systems in Jamaica – which is quite pertinent at a conference like 4s. The last intervention of the first session was chaired by Liv Sovik who presented about the use of audio-visuals as tools for alternative writings and collective and cultural communication. This contextualised the short films that would be presented in the next session. Despite the fact that the conference took place in the early hours of a cold morning, we had a large audience who were participatory and curious about the project. After two hours of presentations, we took a half hour break to get some fresh air, stretch our legs, drink coffee and have informal exchanges. Thankfully, the attendees of the first session returned for the second session and some more joined. This showed that the project was interesting and invited participants to delve further into the subject, this time, through audio-visuals. 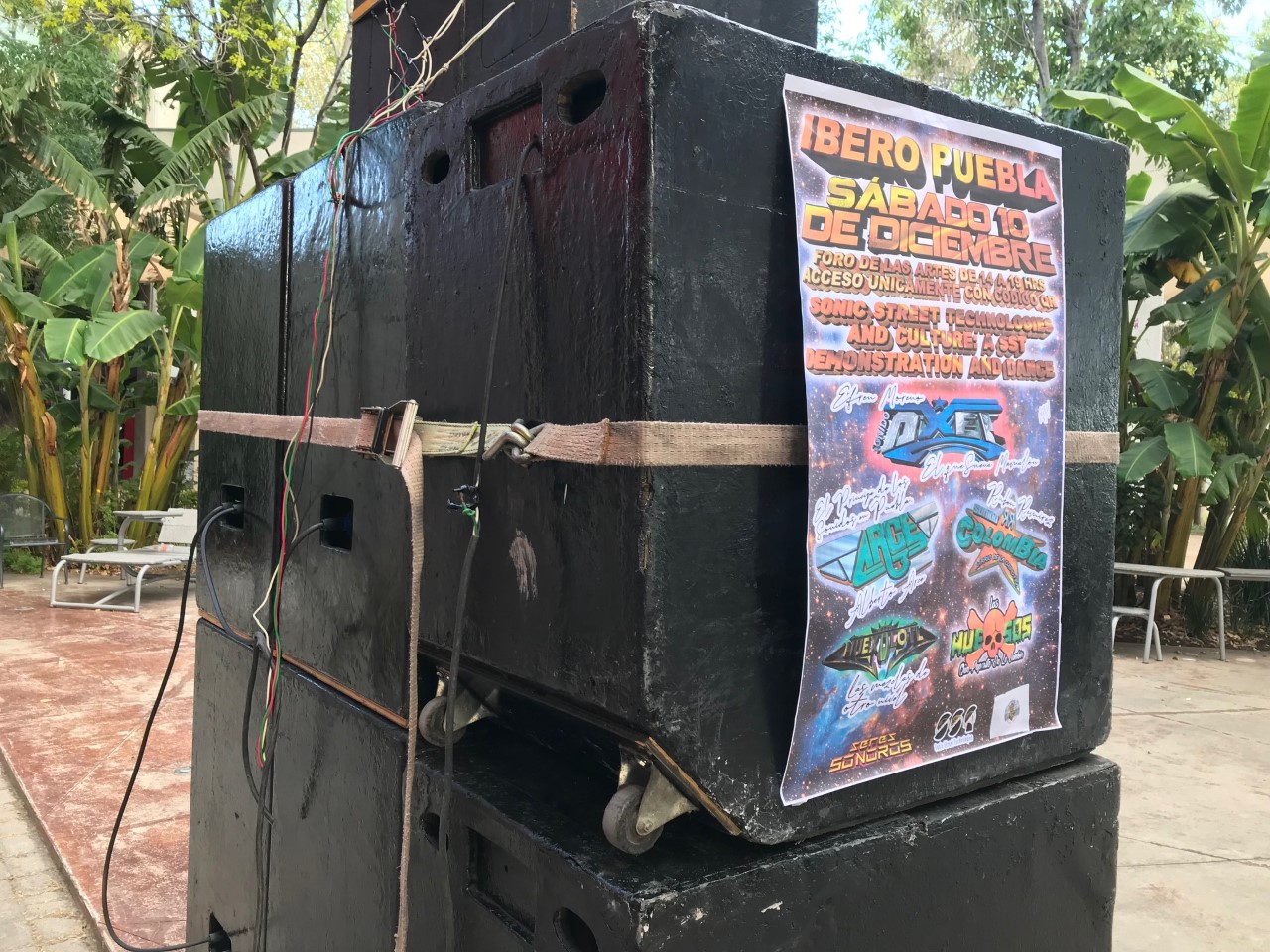 As they say out there “a film is not a film until it is screened to an audience.” So, as a premiere, three short films were presented and very well received. The first one produced by “Feminine Hi-Fi” touched the entire audience, including myself. In my case, as a racialized woman in Latin America, I was moved to see that a group of women can effectively create and sustain a community through music. This brings me to tears and fills me with hope and strength: sharing laughter and dance in lands that can sometimes feel lonely or insecure, like some regions of Latin America. Thus, immediately after the performance, I thanked the filmmakers for their work and inspiration. For a moment I felt a little insecure about showing emotion in an academic conference without having the words to rationalize what I was feeling inside, however, the feminist paths that I have followed in recent years have taught me how important it is to share with compañeras (colleagues) how their work touches us and motivates us to continue. To my surprise, the compañera sitting next to me shed tears that I had refused to let out. The projection of the short film made her feel accompanied and in the right place – she did not feel she belonged at this conference, until she saw that short film which reminded her of her own land and people… The participation of the SST team took a turn: it went from being a merely rational exhibition to a demonstration of the affective power of sonic street technologies in building a sense of community. Thus, the sensitivity, affectivity and community resistances of the Global South became central to the discussion. The following short film followed the same path, the atmosphere of respect, empathy and solidarity filled the room. The second film by Dakta Dub and Roy Dipankar of India’s Monkey Sound System illustrated the ability of sound systems to reimagine public spaces to reinvent our forms of social coexistence that transcend the historical and cultural norms of the region. Finally, El Gran Latido from Colombia showed the role that SST play in the recovery of public spaces in the face of violence, and its power as a reunification tool during the National Strike in Colombia. This last short film led us to experience a diversity of emotions typical of Latin America: anguish, courage, resilience and hope to nourish those of us who fight for a dignified, violence-free in Latin America. This closed the first day of presentations. 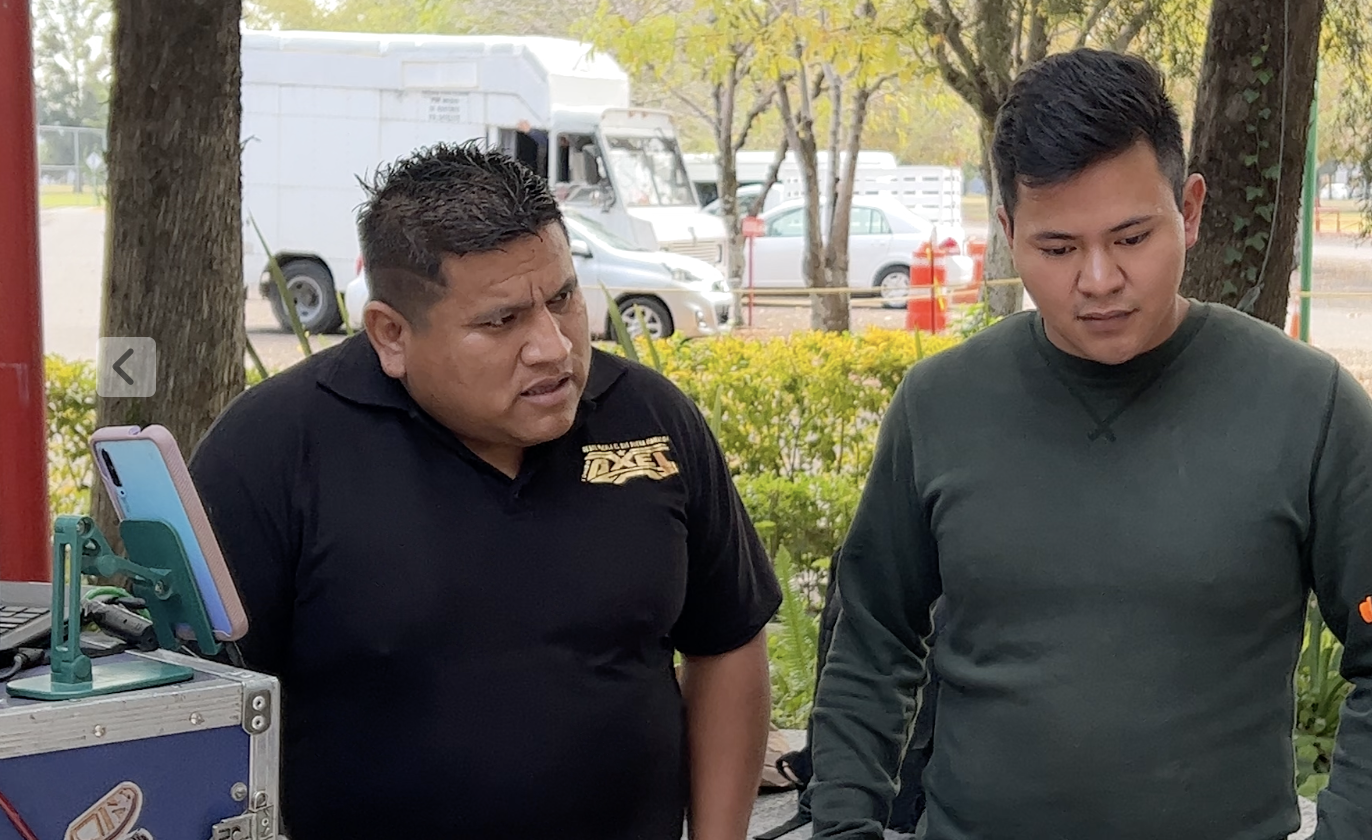 On Saturday December 10th we had a practical workshop with Efrén Moreno owner of Sonido Axel based in Puebla, followed by a sonidero poblano dance. The objective: to open the doors of an academic space, recognise the knowledge of the sonideros and learn from them. Despite the obstacles that arose before and during the presentation, the event demonstrated the power of cohesion that revolves around the sound and dance that make up the community. Days before the event, we were unable to put up posters to promote the workshop. Under the argument that the posters had not been approved by the official university board, the few posters that we had placed in the university facilities were removed from its walls. This, consequently, prevented the dissemination of the workshop within the university and within the framework of the conference. These posters had been designed by Huexolotl Mix from the Seres Sonoros collective, who was a fundamental piece in organising the event and bringing together the different sounds that participated that afternoon. The second obstacle we faced was the denial of access to those who had been invited to participate in the dance: closed to those who in a certain way make and sustain the community. Unfortunately, this strict adherence to the norms revealed invisible structural inequalities as well as the lack of affirmative actions for the inclusion of historically marginalised populations in academic venues such as practitioners of the popular culture. This gave us even more energy to develop the activity with more dedication, since what this project is about is to value and demonstrate the importance of street technology and popular culture for the sustainability of the life of communities that may have been historically marginalised. So, we made sure that our guest and teacher of the day, Efren Moreno, as well as all his collaborators, managed to enter the university and had a microphone in hand to explain to us the operation of the technology they use and the role it plays within the sound culture. Efren showed us that his work is collective: he is not alone, he has a whole team of people who help him assemble and build his work team, help each other on sound nights and build community. For this reason, Efren called to the front the young people who help him select the music of the moment, to build a unique sound system and even one of the masters of the sonidero scene in Puebla: Don Alberto. Later on, the crew Huesos (bones) came in and they taught us what dancing is really like! I didn’t quite make it, but I had fun. Thanks to the line-up managed by Huexolotl Mix, we had an enjoyable and long afternoon of partying and dancing. Finally, it was a pleasure to see that those who accompanied us that afternoon, the public, were the same ones who were with us in the presentations on Wednesday, others who were attracted by the sound and a few others committed to culture, community, and dignified life. This, for me, is one more example of what sonidero technology and crews do: they make the community dance in order to sustain life. 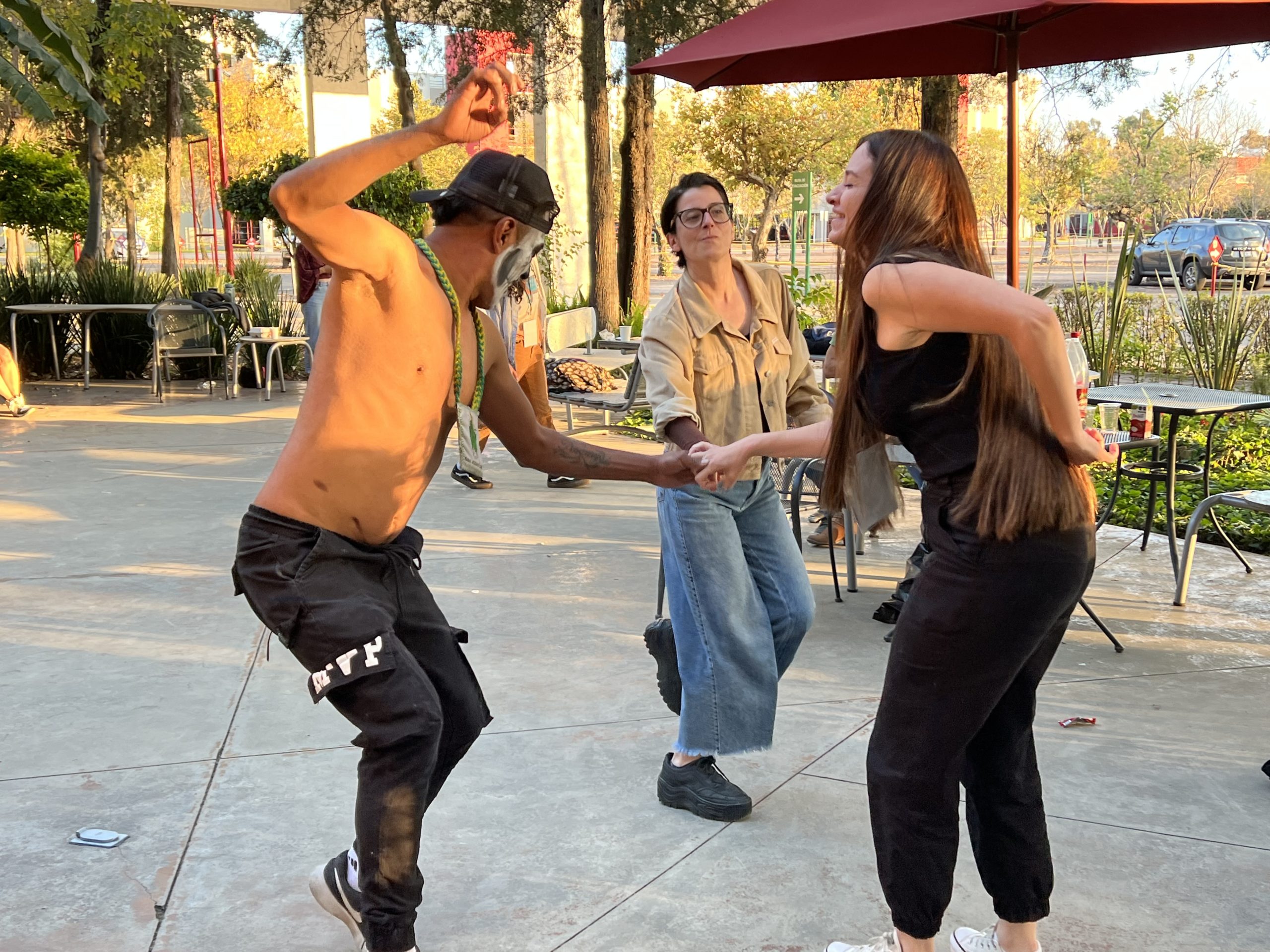 Huesos and attendees at the dance