A CD turntable reported as a " seizure " by the police (Twitter of the Ministry of the Home Affairs).


Tekno sound systems are a part of those Sonic Street Technologies that have been most severely affected by the health restriction measures around the world. In this respect, while streaming music events are a valuable type of experience, they cannot substitute for collective and intensive sound experiences of these physical spaces of expression and sociability, which are not merely entertainment but have a vital social and political function (see also Brian D’Aquino’s previous blog) . Here French scholar Jean-Christophe Sevin reports on alarming developments in France.

This blog is also available in French at this link.

The Redon teknival held on June 19th, 2021, showed a violent escalation of police tactics in France. This event was organised in the memory of Steve Maia Caniço (see pic 1) who died by drowning after a police intervention at another tekno party on the banks of the Loire River in Nantes, on June 21st 2019. The extreme and illegal tactic – if we consider that France is a state governed by the rule of law – is to destroy the speakers, turntables, mixing desks and almost everything that comprises a sound system. The is what the police did in Redon.

The teknival “des musiques interdites” (forbidden music) was organized to commemorate not only Steve Caniço’s death, but also to show support to nine people charged for ‘Maskarade’, the 2020 NYE rave party. The journalists who had access to the gendarmerie’s Redon report evoke “a totally disproportionate operation” including the mobilisation of 400 policemen in the middle of the night without any visibility, leading to confrontations with the partygoers for more than seven hours, which led to the evacuation of five policemen for light injuries. [1] Meanwhile, the use of hundreds of teargas and stun grenades, as well as crowd dispersal grenades, caused dozens of injuries among the partygoers, who later suffered from post-traumatic stress. Even though a young man had his hand torned off by a grenade, notes from the gendarmerie reveal “the law-enforcement’s indifference, despite being informed in real time of young partygoers in life-threatening conditions.” [2]

While emergency services and journalists were prevented from entering the zone to rescue the wounded, the young man who lost his hand had to be driven to the hospital by the ravers themselves. The next day in the afternoon, during a second intervention , members of an elite gendarmerie unit (GIGN) were also deployed to destroy the teknival installations, including equipment such as speakers, mixers, amplifiers, generators, etc., for a total damage estimated around 100,000 euros. [3] With a kind of cynicism, the photos shared by the official twitter account of the police mentioned the seizure of the material… 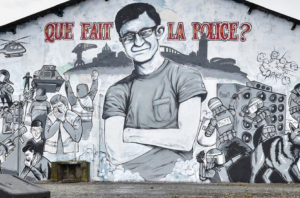 The word ‘teknival’ refers to a multi-day free tekno party with multiple sound systems. It is a combination of the words ‘festival’ and ‘tekno‘, where the letter ‘k’ stands for an alternative to “commercial” techno clubs and festivals. There is no proper organizer in a teknival, except for the person or the collective scoping out an appropriate location, towards which sound systems and ravers will converge at a set time. The tactical media connection of the sound system’s mobility , initially with the use of voice mail (3672) and then the mobile phone, appears to be essential in the operating mode of free parties [4]. This is akin to those ‘cross-cutting tactics that do not obey the law of place’, as De Certeau puts it, and which are opposed to state strategies of surveillance. [5] It’s like a swarm that is formed during the teknival before dispersing and then reconstituting itself for another occasion. [6] This proven swarming tactic takes the police by surprise, and once the sound systems are set up and the party has started, they are not able to stop it unless they resort to take over the site, as they did in Redon. 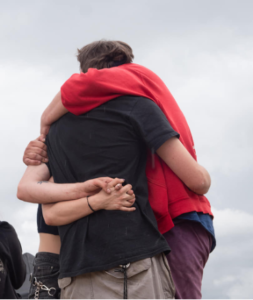 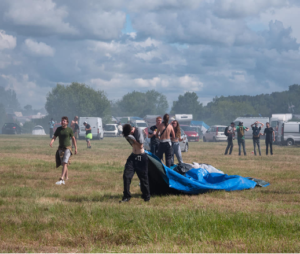 Pic 3-4 Ravers tear-gassed by the police in Redon, from Tales of Rave, https://www.facebook.com/talesofrave

As Moses Iten points out in another post on this blog, the free tekno movement, which originated in the UK and then spread to Europe and other continents, has not “emerged from the needs of an oppressed majority to culturally express themselves”, like in Jamaica, Mexico or Colombia.  “Neither does it appear to have been fueled by immigrant communities.” Those whom Matthew Collin calls “the perpetual refuseniks of European rave culture,” come together each year at “these raggedy jamborees”, in isolated areas of Italy, Poland, the Czech Republic or Romania. [7 ] But it’s in France that the free tekno found its breeding ground and made its deepest impact on a public initially drawn – in part – from the alternative rock scene, converted by the encounter with pioneering sound systems such as Spiral Tribe.

The members of Spiral Tribe left England after being prosecuted for the illegal rave in Castlemorton Common in May 1992. [8] In June 1993 they were booked for a big rave (legally organised) at the Amiens Exhibition Centre with a line-up of international DJs. The Oz  rave was cancelled last minute by the authorities, following a press campaign linking drugs to techno, but and despite ravers were flocking from all over Europe.25 In this hostile context for techno music, Spiral Tribe, rich from its experience and its DIY culture, decided to invite ravers and sound systems to the first French teknival in Beauvais in July 1993. Since then, teknivals have been organized every year, albeit under changing political conditions. 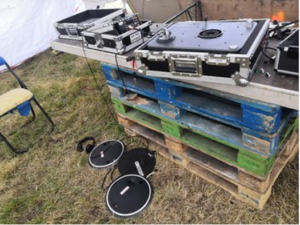 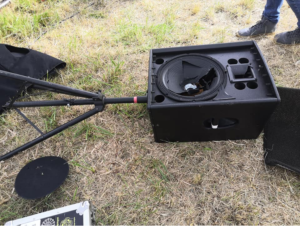 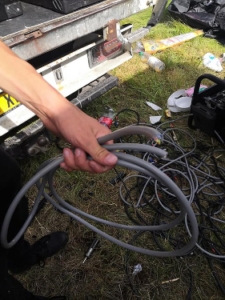 Pic 5-6-7 Equipment destroyed by the police in Redon

From the start of the 2000s, and echoing what happened in England with the Criminal Justice Bill (1994) a few years earlier, the organizers of unauthorized music gatherings in France involving more than 500 people can face fines as well as the confiscation of sound equipment. This new legislation has tamed the French tekno movement, at least in part. In August 2002 the gathering of ravers and sound systems on the French-Italian border, in spite of a police operation to prevent it, led the authorities to negotiate a compromise with a coalition of sound systems around two teknivals authorized each year in May and August, in cooperation with the state services. Teknivals remained places of confrontation with the police during this period, even if a minimal dialogue continued until the mid-2010s. [10]

The large illegal teknival organized on May 1st, 2016 explicitly addressed the increasingly frequent seizures of sound systems. Around the mid-2010s tekno sound systems becoming more organized around a “fond de soutien juridique des sons” (legal support fund for sound systems, see pic 8). Established in 2014,  the fund is crowdfunded to cover the legal costs to oppose sound systems confiscation. An ethics committee reviews the case and offers support when the seizure is deemed to be abusive. The committee also verifies “that the organizers requesting support are not at fault, that they respect the site and nature”.  When the support fund gets involved, the sound system is usually returned. [11]

The teknival is a key moment of affirmation of this movement on a European scale, but its very existence can never be taken for granted and must always be defended. This is particularly true in pandemic times. In March 2020 the sound systems cancelled the teknival scheduled for May 1st 2020 to comply with the health measures. But then, the widespread public consensus to the prohibition of parties and gatherings was quickly lost in the face of inconsistent public policies, crowded public transport and shopping centers, preferential treatment of other events… If many cultural actors no longer accepted this situation, the tekno sound systems, with their DiY culture and their tactics of escaping surveillance appeared to be the ones to spearhead this refusal movement.

On New Year’s Eve 2021, despite an enforced curfew and heavy police surveillance, 2500 ravers managed to occupy a warehouse in the village of Lieuron, Brittany, after forcing two police blockades. As it happened with other summer raves this New Year’s Eve free party became a national affair and made the front page in France. A 21-year-old raver, Tristan, was arrested, and detained until January 22. Eight more attendants were arrested in the next days later, facing up to ten years in prison. On May 1st, 2021, a number of raves were stopped by the police, and at least for one of them, in addition to the use of the usual police arsenal, the destruction of sound equipment, turntables and records was noted. [12] 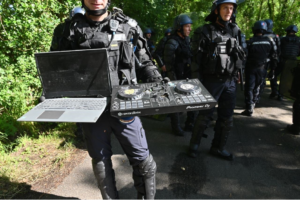 Pic 9 DJ equipment reported as a ‘seizure’ by the police (from the Ministry of the Home Affairs official Twitter account).

Without claiming to provide a definitive explanation, we can nevertheless try to put into perspective the meaning of the underground in a context of freedom restrictions that the authorities have imposed, partly opportunistically, on the pretext of the health situation. Many were aware of the inversion of responsibility, which consisted in blaming the unruly citizens for the epidemic when it was the unpreparedness of the elites and a failing health system that had produced the need for a lockdown. [13] Several high-profile, clandestine events (dinners, parties, New Year’s Eve parties, etc.) took place during the lockdown, and those who were discovered and fined sometimes gave the impression that the price of the fine was somehow included in the budget. [14]

However, what the activists of the New Year’s rave or the Redon teknival have reasserted in their own way is the importance of the autonomous dimension and the “Do It Yourself” spirit, with its values of openness, accessibility and the search for an alternative.In other words, it is not a question of going underground or clandestine only to escape controls in times of lockdown. In this case the teknival was publicly announced and claimed: “we have decided, in contrast to what is now customary to call clandestine parties, not to hide in a rented lodge or festival hall, but to exhibit in the public eye what we consider to be the essence of human life: joy, encounters and sociability“. [15]

In its report on the abusive use of force against the Redon teknival, Amnesty International recalls that the intervention of the police forces took place without communication nor negotiation, and against the principle of proportionality. The authors of this report note that this use of force, which was unnecessary and did not respect the basic principles of the United Nations, “may be seen as an act of punishment.” [16]

The day after Redon, June 21st, was the annual national music day. A party was held at the Presidential Palace in the presence of Emmanuel Macron, to the sound of electronic music.

Jean-Christophe Sevin is a lecturer in information and communication sciences (Avignon University/Centre Norbert Elias). After investigating the political and cultural reception of raves and techno music in France, he is working on the trans-local dynamics of reggae from a fieldwork in Marseille, and as a Research Agent in the SST project he investigates sound-system culture in France.

[4] Before the widespread use of mobile phones, the 3672 voice mailbox was a service offered by France Telecom that allowed people to leave a message that could be checked via a code from a phone cabin and, since the late 1990s, from a mobile phone. 3672 has become “iconic” in its association with the tekno movement.

[8] Cf. ‘Free Party. A folk history of the free party movement’. A crowdfunded documentary film project to be released on the 30th anniversary of the Castlemorton rave in May 2022. https://www.kickstarter.com/projects/mrtorquay/free-party-a-documentary.